Kevin Michael Rudd (born 21 September 1957) is an Australian former politician who was the 26th Prime Minister of Australia, serving from December 2007 to June 2010 and again from June to September 2013. He held office as the leader of the Australian Labor Party.

Before entering politics, he worked as a diplomat, political staffer, and public servant. Rudd was elected to the House of Representatives at the 1998 election, running in the Division of Griffith. He was promoted to the Shadow Cabinet in 2001 as Shadow Minister for Foreign Affairs.

In December 2006, he successfully challenged Kim Beazley to become the Leader of the Labor Party (and thus Leader of the Opposition). Under Rudd, Labor overtook the Coalition government led by John Howard in the polls, making a number of policy announcements in education, health, industrial relations, and climate change. 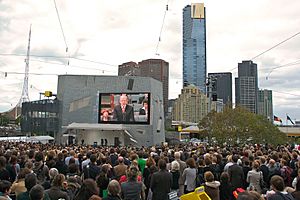 Kevin Rudd on screen in Federation Square, Melbourne, apologising to the Stolen Generations 2008

Labor won the 2007 election by a landslide. The Rudd Government's first acts included signing the Kyoto Protocol and delivering an apology to Indigenous Australians for the Stolen Generations.

Despite a long period of popularity in opinion polls, a significant fall in Rudd's personal ratings in the middle of 2010 was blamed on a proposed Resource Super Profits Tax and the deferral of the Senate-rejected Carbon Pollution Reduction Scheme. 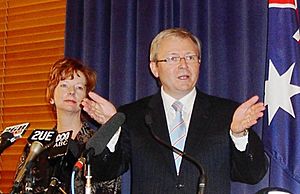 With the next election drawing near, there was growing dissatisfaction with Rudd's leadership within the Labor Party. Rudd's deputy Julia Gillard eventually announced on 23 June 2010 that she would challenge him for the leadership the following day. He chose not to contest, knowing he would be defeated if he contested the leadership, and on the morning of the ballot he resigned as Prime Minister. However, he remained in politics.

In September 2010, Rudd was promoted back to cabinet as Minister for Foreign Affairs. He remained in that post until his resignation on 22 February 2012. A further ballot was held in June 2013, which Rudd won 57–45. His second term as prime minister lasted less than three months; he became the first serving Australian prime minister to publicly support same-sex marriage. Despite an initial rise in opinion polls following his return, Labor was defeated in the 2013 election. 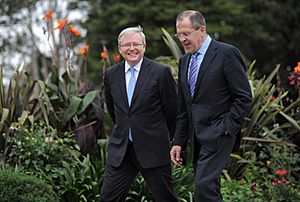 Rudd announced his retirement from politics a few months after the 2013 election. In February 2014, he was named a senior fellow with John F. Kennedy School of Government at Harvard University, where he completed a major research effort on the future of China–United States relations. In September 2014, he became a distinguished fellow at the Paulson Institute, a think tank at the University of Chicago. He is also the inaugural President of the Asia Society Policy Institute, and chairs the Independent Commission on Multilateralism and the Sanitation and Water for All global partnership. 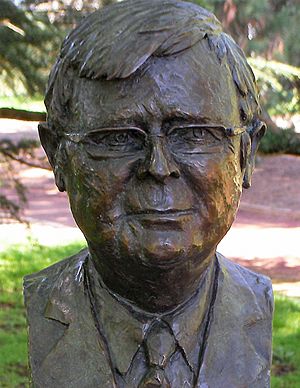 Rudd is of English and Irish descent. His paternal fourth great-grandparents were English and of convict heritage: Thomas Rudd and Mary Cable. Thomas arrived from London, England in 1801; Mary arrived from Essex in 1804. Thomas Rudd, who was convicted of stealing a bag of sugar, arrived in NSW on board the Earl Cornwallis in 1801.

Rudd was born in Nambour, Queensland, to Albert and Margaret (née DeVere) Rudd, the youngest son of four children, and grew up on a dairy farm in nearby Eumundi. At an early age (5–7), he contracted rheumatic fever and spent a considerable time at home convalescing. It damaged his heart, in particular the valves, for which he has had two aortic valve replacement surgeries, but this was discovered only some 12 years later. Farm life, which required the use of horses and guns, is where he developed his lifelong love of horse riding and shooting clay targets. He attended Eumundi State School. 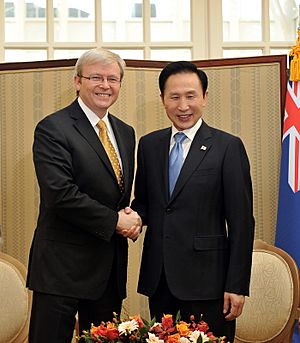 Rudd boarded at Marist College Ashgrove in Brisbane, and later attended Nambour State High School, where he was dux of 1974. His future Treasurer Wayne Swan attended the same school at the same time, although they did not know each other. In that year, he was also the Queensland winner of the Rotary "Youth Speaks for Australia" public speaking contest.

Rudd studied at the Australian National University in Canberra, where he resided at Burgmann College and graduated with Bachelor of Arts (Asian Studies) with First-Class Honours. He majored in Chinese language and Chinese history, became proficient in Mandarin. His Chinese name is Lù Kèwén. He has a degree in Chinese studies from the Australian National University, and is fluent in Mandarin. In 1980 he continued his Chinese studies at the Mandarin Training Center of National Taiwan Normal University in Taipei, Taiwan. 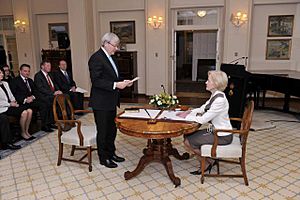 Rudd joined the Department of Foreign Affairs in 1981, serving as a diplomat until 1988. He and his wife spent most of the 1980s overseas at various Australian embassies, including in Stockholm and in Beijing.

Returning to Australia in 1988, he was appointed Chief of Staff to the Opposition Leader in Queensland, Wayne Goss. He remained in that role when Goss was elected Premier in 1989, a position he held until 1992 when Goss appointed him Director-General of the Office of Cabinet. 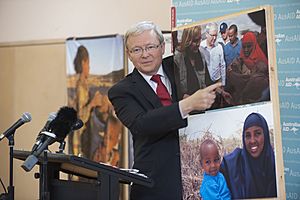 In this position, Rudd was arguably Queensland's most powerful bureaucrat. He presided over a number of reforms, including development of a national program for teaching foreign languages in schools. Rudd was influential in both promoting a policy of developing an Asian languages and cultures program which was unanimously accepted by the Council of Australian Governments (COAG) in 1992 and later chaired a high-level working group which provided the foundation of the strategy in its report, which is frequently cited as "the Rudd Report". 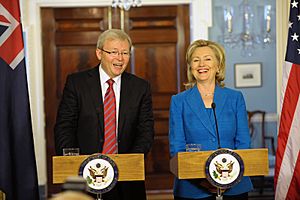 Since leaving the Australian Parliament, Rudd has served in senior roles for a range of international organisations and educational institutions. In early 2014, Rudd left Australia to work in the United States, where he was appointed a Senior Fellow at the Harvard Kennedy School's Belfer Center for Science and International Affairs in Cambridge, Massachusetts, where he completed a major research effort on the future of US-China relations.

Through 2014 Rudd joined the Center for Strategic and International Studies as a distinguished statesman, and was appointed a distinguished fellow at both the Paulson Institute at the University of Chicago, Illinois and Chatham House, London. 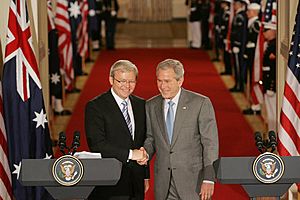 In September of that year, he was appointed Chair of the Independent Commission on Multilateralism at the International Peace Institute in Vienna, Austria, and in October became the first President of the Asia Society Policy Institute in New York City.

On 5 November 2015, Rudd was appointed to chair Sanitation and Water For All, a global partnership to achieve universal access to drinking water and adequate sanitation. He has also actively contributed to the World Economic Forum's Global Agenda Council on China. Rudd is also a member of the Berggruen Institute's 21st Century Council. On 21 October 2016, he was awarded an Honorary Professorship at Peking University. 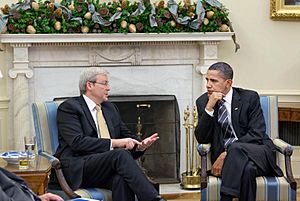 Rudd is also a Member of the Global Leadership Foundation, an organization which works to support democratic leadership, prevent and resolve conflict through mediation and promote good governance in the form of democratic institutions, open markets, human rights and the rule of law. It is a not-for-profit organization composed of former heads of government, senior governmental and international organization officials who work closely with Heads of Government on governance-related issues of concern to them.

In 2017, Rudd began studying for a doctorate on Xi Jinping at Jesus College, Oxford, also in 2017 Rudd launched the first volume of his autobiography which chronicles his life until becoming prime minister in 2007. 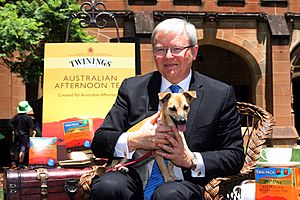 In 1981, Rudd married Thérèse Rein whom he had met at a gathering of the Australian Student Christian Movement during his university years. Both were residents at Burgmann College during their first year of university. Rudd and Rein have three children.

All content from Kiddle encyclopedia articles (including the article images and facts) can be freely used under Attribution-ShareAlike license, unless stated otherwise. Cite this article:
Kevin Rudd Facts for Kids. Kiddle Encyclopedia.