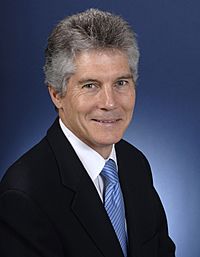 Stephen Francis Smith (born 12 December 1955) is an Australian politician. He is a member of the Labor Party. He was a member of the House of Representatives for the Division of Perth from 1993 to 2013. He was also a minister in the Rudd and Gillard governments, serving as Minister for Foreign Affairs (2007–2010), Minister for Trade (2010) and Minister for Defence (2010–2013).

All content from Kiddle encyclopedia articles (including the article images and facts) can be freely used under Attribution-ShareAlike license, unless stated otherwise. Cite this article:
Stephen Smith (Australian politician) Facts for Kids. Kiddle Encyclopedia.