John Howard was a lawyer before he became a politician. He was in parliament from 1974 until 2007. From 1977 to 1983 he was the Treasurer in Malcolm Fraser's government. Malcolm Fraser lost the 1983 election to Bob Hawke. On 24 November 2007, John Howard lost to Kevin Rudd and his parliamentary seat to Maxine McKew. He became the second prime minister to lose a parliamentary seat after Stanley Bruce in 1929. 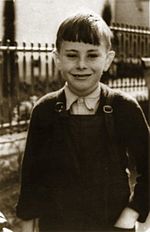 John Howard as a boy

John Howard is the fourth son of Mona (nee Kell) and Lyall Howard. His parents were married in 1925. His eldest brother Stanley was born in 1926, followed by Walter in 1929, and Robert (Bob) in 1936. Lyall Howard was an admirer of Winston Churchill, and a sympathiser with the New Guard. Howard's ancestors were English, Scottish and Irish.

Howard was born and raised in the Sydney suburb of Earlwood, in a Methodist family. His mother had been an office worker until her marriage. His father and his paternal grandfather, Walter Howard, were both veterans of the First AIF in World War I. They also ran two Dulwich Hill petrol stations. Howard worked there as a boy.

Howard suffered from a hearing impairment in his youth. It ruled out the chances of him becoming a barrister as a likely career from his mind. To this day, John wears a hearing aid. 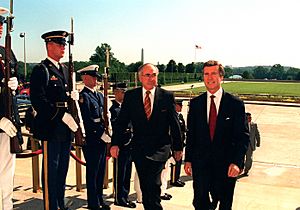 One of Howard's first initiatives was to unite the state governments of Australia to place a ban on gun ownership in Australia. This move came after the Port Arthur Massacre in Tasmania in 1996. In 1998, Howard and his Treasurer, Peter Costello took a big tax reform (the GST) to the election and won.

In 1999 John Howard's government held a referendum on whether Australia should become a republic and have a President instead of a Queen. However, John Howard did not support the referendum and urged people to vote no. The Australian Labor Party opposition led by Kim Beazley criticised John Howard's handling of the 1998 Australian Waterfront Dispute.

In 1999, Howard led a United Nations force into East Timor (INTERFET), to help them set up an independent democracy. 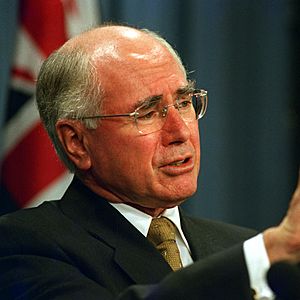 Like before Howard, Australian trade with Asia got bigger while John Howard was leader. He invited the Chinese leader Hu Jintao to speak to the Australian Parliament for the first time. After the 2004 Boxing Day Tsunami, John Howard called the President of Indonesia and offered a billion dollars to help. John Howard increased immigration a lot and people came to Australia from all over the world, but he tried to stop boats of people coming without asking for visas first. 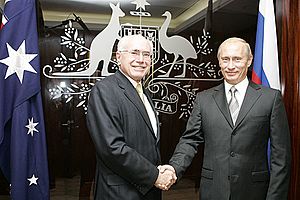 John Howard with Vladimir Putin at the 2007 APEC sumit

Australia was successful while John Howard was leader. In 2005, he made it easier for bosses to get rid of workers by introducing the controversial WorkChoices industrial legislation introduced by his Workplace Relations Minister Kevin Andrews. This upset people and the Labor Party became more popular. On 24 November 2007, Kevin Rudd won an election and John Howard stopped being Prime Minister. John Howard also lost his seat in the Parliament to the Labor Party candidate Maxine McKew, a former ABC TV journalist.

All content from Kiddle encyclopedia articles (including the article images and facts) can be freely used under Attribution-ShareAlike license, unless stated otherwise. Cite this article:
John Howard Facts for Kids. Kiddle Encyclopedia.