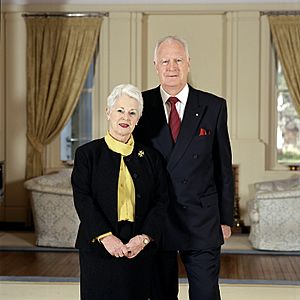 Peter John Hollingworth AC OBE (born 10 April 1935) is an Australian retired Anglican bishop. He served as the Archbishop of the Anglican Diocese of Brisbane in Brisbane, Queensland from 1989 to 2001. He then served as the 23rd Governor-General of Australia from June 2001 until he resigned in May 2003.

In 1991, Hollingworth was named Australian of the Year. In 2001, he was awarded the Centenary Medal.

Hollingworth was born in Adelaide, South Australia. He grew up in Melbourne, Victoria. He married Kathleen Ann Turner in 1960. The couple have three daughters.

All content from Kiddle encyclopedia articles (including the article images and facts) can be freely used under Attribution-ShareAlike license, unless stated otherwise. Cite this article:
Peter Hollingworth Facts for Kids. Kiddle Encyclopedia.