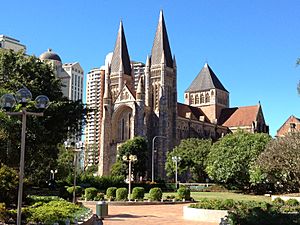 The Anglican Diocese of Brisbane is based in Brisbane, Queensland, Australia. The diocesan bishop's seat is St John's Cathedral, Brisbane. The current Archbishop of Brisbane is Phillip Aspinall, who was formerly the elected Primate of the Anglican Church of Australia.

The diocese stretches from the south-eastern coastline of Queensland, south to the New South Wales border, and west to the Northern Territory and South Australian borders.

Queen Victoria created the Anglican Diocese of Brisbane and in 1859 appointed Edward Tufnell (1814–1896) as the first diocesan bishop. Tufnell designated St John's Cathedral in Brisbane as the pro-cathedral. The central stained glass windows in the apse, the crucifixion, at St Mary's Church, was donated by Bishop Tufnell.

The second bishop was Matthew Hale, who was translated from Perth in 1876. Hale was succeeded by William Webber, who was the last man to be only Bishop of Brisbane (from 1885 to 1904) as the new ecclesiastical province of Brisbane would in future be headed by an archbishop as the incumbent.

The Diocese of Brisbane has a predominantly moderate Anglo-Catholic culture. Groups such as the Society of Saint Francis and the Oratory of the Good Shepherd have their Australian base in the City of Brisbane and the Society of the Sacred Advent first emerged in the city. This latter group is responsible for running St Margaret's Anglican Girls' School.

Saint Francis' Theological College, at which most of the diocese's priests are trained, has historically "combined a Catholic interpretation of the Book of Common Prayer with an acceptance of ‘moderate’ biblical criticism. This... [is]... the liberal Catholicism of Bishop Gore and Lux Mundi".

Archbishop Phillip Aspinall is, himself, a liberal Anglo-Catholic and gave the keynote address at the Australian Church Union's 2006 Keble Mass. Consistent with this more liberal tendency, the Social Responsibilities Committee of the diocese has endorsed same-sex civil unions.

For the most part the diocese's parishes exhibit the "rather self-conscious Anglo-Catholic congregationalism of the capital cities, often tinged with radical Socialism". Parishes that reflect this outlook include Holy Trinity Fortitude Valley, with its emphasis on social justice, and Kilcoy-Woodford with its focus on Christian pacifism.

The Angligreen environmental group has also emerged as a significant voice in the diocese.

By contrast, All Saints' Brisbane is notable for having links to the conservative Forward in Faith organisation which maintains a small presence in the city. Of All Saints' Masses, journalist Keith Dunstan noted "‘the whole sense of theatre’. Others, drawing on a religious vocabulary, compared the experience to ‘being in heaven’." However, All Saints is an exception to the more moderate approach as "'extreme’ Anglo-Catholicism [never took hold in Brisbane and] has flourished only among clergy in the diocese of Ballarat."

Despite this dominant Anglo-Catholic ethos, there is a low church Bible belt running through a few of the City of Brisbane's southern suburbs. However, the last time there was any major controversy about the diocese's Anglo-Catholic outlook was in 1956.

With the creation of the Province of Queensland in 1905, the Diocese of Brisbane became the permanent metropolitan see, and its bishop the metropolitan archbishop.

All content from Kiddle encyclopedia articles (including the article images and facts) can be freely used under Attribution-ShareAlike license, unless stated otherwise. Cite this article:
Anglican Diocese of Brisbane Facts for Kids. Kiddle Encyclopedia.