Milton is an inner suburb of Brisbane, Australia, approximately 2 kilometres (1.2 mi) west of the central business district. The suburb is a mixture of light industry, warehouses, commercial offices, retail and single and multiple occupancy residences. The main roads are Milton Road, which runs beside the main western rail line and Coronation Drive (formerly River Road), which runs along the Brisbane River.

Settlement in the Milton area by Europeans began in the 1840s, with land mostly used for farming and grazing.

The suburb's name was derived from the farm name "Milton Farm", used from the late 1840s by Ambrose Eldridge, chemist. Eldridge named the farm after John Milton, the English poet. Between 1900 and 1962, Milton was served by trams running along Milton Road from Toowong and Rainworth, with the latter branching off at Baroona Road. The services were withdrawn after the disastrous Paddington tram depot fire and replaced by buses. The suburb continues to be served by most western suburb bus routes operated by Brisbane Transport.

Between 1927 and 1969, the Brisbane City Council's tramway workshops were located at Boomerang Street, a site formerly used as a nightsoil dump. Trams accessed the workshops from Milton Road, under the railway line. After the closure of the tram system on 13 April 1969, the workshops continued to be used to service the City Council's bus fleet, until the workshop complex was shifted to Toowong in 1979. The workshops were then demolished and the site used as a successful "Park and Ride" car park, where commuters could park their cars at the edge of the CBD and continue their journey by bus. However, in the late 1980s, a change in City Council policy saw the site sold for office development.

On the other side of Boomerang Street stood another notable Milton landmark, the Arnotts biscuit factory, which was demolished in the 1990s after Arnotts moved their Brisbane operations to Geebung.

The Brisbane City Council's trolley-bus depot and garage was located between Chippendale and Castlemaine Streets and operated between 1951 and 1969. The building remained until it was demolished to make way for the redevelopment of Suncorp Stadium.

The median age of the Milton population was 30 years of age, 7 years below the Australian median. 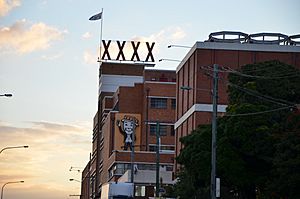 Notable landmarks in Milton include the Castlemaine Perkins brewery, known for the "Fourex" (XXXX) range of beers, the Suncorp Stadium (formerly Lang Park), a portion of the Brisbane riverwalk and the Park Road strip of restaurants and cafés.

The suburb also once was the site of Milton Courts, Brisbane's major tennis courts, where major international and national tournaments were held until the courts closed in the 1990s. The Milton Bowl, a small ten-pin bowling alley located at the Rosalie end of the suburb closed on 17 March 2008, after 45 years. In 2014 Brisbane City Council redeveloped tthe former Milton Courts and Milton Bowl sites as Frew Park, a large inner city parkland incorporating tennis courts, children's playground and open space.

Milton has a number of heritage-listed sites, including:

By Train, the Milton Railway Station is the first station on the Ipswich line west of Roma Street Station. It is served by commuter trains only.

All content from Kiddle encyclopedia articles (including the article images and facts) can be freely used under Attribution-ShareAlike license, unless stated otherwise. Cite this article:
Milton, Queensland Facts for Kids. Kiddle Encyclopedia.