Auchenflower is an inner suburb of the City of Brisbane, Queensland, Australia. In the 2016 census, Auchenflower had a population of 5,870 people. 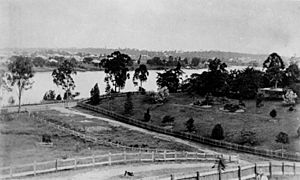 The area was formerly populated by rural estates, one of which was named 'Auchenflower' by Thomas McIlwraith circa 1880.

Between 1900 and 1962 Auchenflower was served by trams running along Milton Road from Toowong. The services were withdrawn after the disastrous Paddington tram depot fire.

In 1975, the first NightOwl convenience store was opened in the suburb.

In January 2011, Auchenflower experienced flooding as part of the 2010–2011 Queensland floods.

The median age of the Auchenflower population was 31 years of age, 7 years below the Australian median.

77.0% of people only spoke English at home. Other languages spoken at home included Mandarin at 2.1%. The most common responses for religion were No Religion 38.5% and Catholic 21.4%.

Auchenflower has a number of heritage-listed sites, including:

The Wesley Hospital is a private hospital located near the Auchenflower train station. 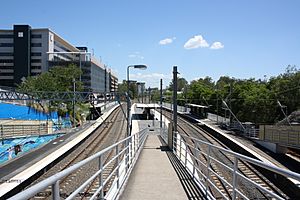 By bus, Auchenflower is served by most western suburb bus routes operated by Brisbane Transport.

By road, Auchenflower has two main roads through the suburb, Coronation Drive and Milton Road, both running from the Brisbane CBD towards the western suburbs. As of 2006 the "TransApex" traffic proposal touted by the former Lord Mayor, Campbell Newman, involves the construction of a major road tunnel system through Brisbane, including one to run under Toowong, Auchenflower and Milton, possibly along the alignment of Milton Road.

By bicycle, the Bicentennial Bikeway runs along the Brisbane River allowing access to the Brisbane CBD through to Toowong.

All content from Kiddle encyclopedia articles (including the article images and facts) can be freely used under Attribution-ShareAlike license, unless stated otherwise. Cite this article:
Auchenflower, Queensland Facts for Kids. Kiddle Encyclopedia.