Ascot is a north-east suburb in the City of Brisbane, Queensland, Australia. In the 2016 census, Ascot had a population of 5,777 people.

Historically, the land was occupied by the Aboriginal Turrbal clan. The Turrbal called the area Yowoggerra, meaning Corroboree Place. The clan had camping grounds on the north side of the Brisbane River around the Breakfast Creek area. It was at Breakfast Creek that explorers Oxley and Cunningham met members of the clan in 1824. The clan was often called the ‘Duke of York’s clan’ by whites. In 1858 two Aborigines, Dalinkua and Dalpie from the Breakfast Creek area, wrote letters to The Moreton Bay Courier protesting against the treatment their people.

Convicts were used in the 1830s to clear land and build basic roads. Within a decade wealthy free settlers took land with a view of the Brisbane River. In 1855, pastoralist James Sutherland purchased a large portion of land in the Brisbane area, including Ascot and its surrounds. He built one of Ascot's surviving and historically listed homes, Windermere.

The Eagle Farm Racecourse was established in 1863. Horse racing was one of the earliest sports in Brisbane and the name "Ascot" was given to the suburb as a tongue-in cheek reference to Ascot, England, and its prestigious Ascot Racecourse. There were racing stables throughout the suburb until the late 1920s. 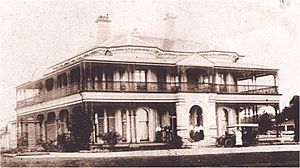 During World War II, several buildings were used by General Douglas MacArthur and the Central Bureau, which had its headquarters at "Nyrambla", 21 Henry Street. In July 1942, MacArthur moved his headquarters to Queen Street in Brisbane city. The Central Bureau work of intercepting and decoding Japanese intelligence remained in Ascot.

Also used was the fire station at 77 Kitchener Road and several other locations in nearby Hamilton. In 1941 military authorities took over the racecourse, then known as Camp Ascot, to house thousands of American troops. Camp Ascot was home to several US units, including the 2nd battalion of the 131st Field Artillery Regiment and the 35th Fighter Group comprising the 39th, 40th and 41st Fighter Squadrons and Headquarters Squadron.

From the 1990s the old servants' quarters of "Nyrambla" were home to the late Australian actor Bille Brown (1952-2013), honorary ambassador for Queensland for his stage work in the Queensland Theatre Company in Brisbane and the Royal Shakespeare Company. 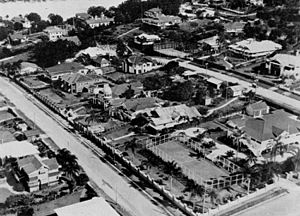 Aerial view of the Riverview Terrace area of Ascot c. 1930

Due to the popularity of the horse races, in 1882 a railway line branch was extended from Eagle Junction to the Eagle Farm Racecourse in Ascot. In 1899 the first electric tram service was extended to Ascot. Trams which ran from Hamilton along Racecourse Road, Lancaster Road and terminated in Alexandra Road continued until 1969.

Ascot has a number of heritage-listed sites, including:

Windermere house has one of the longest family histories in Ascot. It was built by founder of the Ascot suburb James Sutherland for his daughter. After marrying politician/pastoralist John George Appel, the home remained in part of Appel family estate. It is a large home with large surrounding gardens, keeping the house private from view. It has Queenslander style verandahs and each corner is elaborated, one with large bay window, the other with a corner pavilion.

Ascot has a kindergarten in Kitchener Road and a preschool in Barlow Street.

All content from Kiddle encyclopedia articles (including the article images and facts) can be freely used under Attribution-ShareAlike license, unless stated otherwise. Cite this article:
Ascot, Queensland Facts for Kids. Kiddle Encyclopedia.