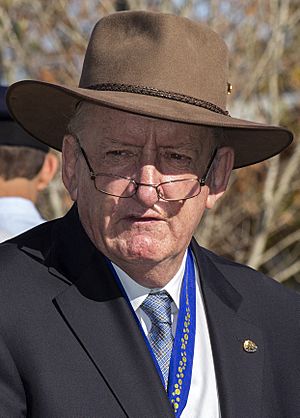 Fischer was born in Lockhart, New South Wales. He served with the Australian Army in the Vietnam War. In the 2005 Australia Day Honours Fischer was made a Companion of the Order of Australia (AC).

In October 2018, Fischer was diagnosed with acute myeloid leukemia. He died from the disease on 22 August 2019 at a cancer treatment center in East Albury, New South Wales at the age of 73.

All content from Kiddle encyclopedia articles (including the article images and facts) can be freely used under Attribution-ShareAlike license, unless stated otherwise. Cite this article:
Tim Fischer Facts for Kids. Kiddle Encyclopedia.