Lockhart is a town in the Riverina Region of New South Wales, Australia. It is the location of the Lockhart Shire Council offices. At the 2011 census, Lockhart had a population of 800 people. 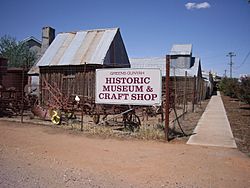 Lockhart was named after C.G.N. Lockhart - a commissioner for Crown Lands in the Murrumbidgee River area in the 1850s. It was originally known as Greens Gunyah, and renamed Lockhart in 1897. Greens Gunyah was so named because a Mr Green was the earliest settler and had a grog shop on the Urana - Wagga Wagga stagecoach route.

Tim Fischer, National Party leader (1990–1999) and 11th Deputy Prime Minister of Australia was born here. A railway station served the town between 1901 and 1975, it has now been restored and converted into a New South Wales Rural Fire Service station. Seasonal grain trains service silos in the town.

All content from Kiddle encyclopedia articles (including the article images and facts) can be freely used under Attribution-ShareAlike license, unless stated otherwise. Cite this article:
Lockhart, New South Wales Facts for Kids. Kiddle Encyclopedia.