Cooran is a small hinterland town and locality in the Shire of Noosa in Queensland, Australia. Between 2008 and 2013 it was within Sunshine Coast Region. In the 2011 census, Cooran had a population of 1,457 people. 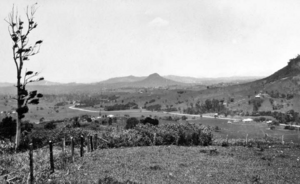 The North Coast railway line passes through the town and northern part of the locality, to the north of Traveston Road. Cooran is served by the Cooran railway station in the centre of the town. 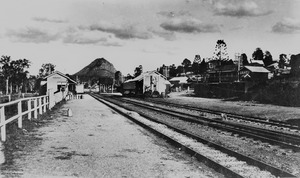 Railway Station at Cooran Queensland with Mount Cooran in the background, ca. 1926

The name Cooran comes from guran or kuran, meaning tall in the Kabi language. This might refer to Mount Cooran or to the tall Moreton Bay Ash trees (Eucalyptus tessellaris).

The Cooran Provisional School opened on 21 July 1890. It became Cooran State School in 1909.

In the 1920s and 30s, banana growing became an important industry around the town. For a period after World War II pineapple farms gained popularity in the district.

Cooran has a number of heritage-listed sites, including:

All content from Kiddle encyclopedia articles (including the article images and facts) can be freely used under Attribution-ShareAlike license, unless stated otherwise. Cite this article:
Cooran, Queensland Facts for Kids. Kiddle Encyclopedia.