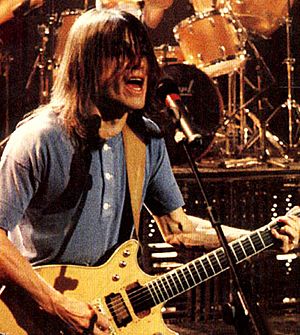 Malcolm Mitchell Young (6 January 1953 – 18 November 2017) was a Scottish-born Australian guitarist. He was the rhythm guitarist for the band AC/DC.

Young left AC/DC in April 2014 to receive treatment for dementia. In September 2014 the band's management announced that his departure would be permanent.

His brothers are George and Angus Young.

Young died on 18 November 2017 at the age of 64 at Lulworth House in Elizabeth Bay. Young's elder brother George Young died a few weeks earlier, on 22 October 2017.

All content from Kiddle encyclopedia articles (including the article images and facts) can be freely used under Attribution-ShareAlike license, unless stated otherwise. Cite this article:
Malcolm Young Facts for Kids. Kiddle Encyclopedia.