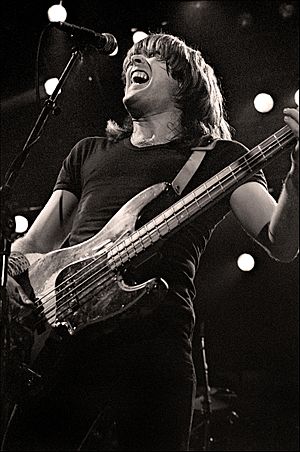 Williams with AC/DC in Manchester, 1982

Clifford "Cliff" Williams (born 14 December 1949) is a former British musician. He is best known as a member of the Australian hard rock band AC/DC. He was a member of the band between 1977 and 2016 as their bassist and backing singer. He, along with AC/DC, were added to the Rock and Roll Hall of Fame in 2003.

Williams was born in Romford, Essex, England. His wife, Georganne, is from Colorado. They have two children, Erin (born 1985) and Luke (born 1986).

All content from Kiddle encyclopedia articles (including the article images and facts) can be freely used under Attribution-ShareAlike license, unless stated otherwise. Cite this article:
Cliff Williams Facts for Kids. Kiddle Encyclopedia.