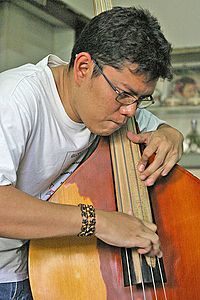 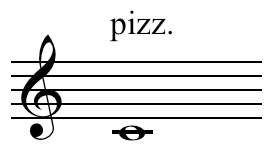 Pizzicato means: playing a string instrument by plucking the strings (pulling a string with the finger and letting go quickly). Instruments such as the violin, viola, cello and double bass are normally played with a bow, but if the composer wants the player to pluck instead of bow, the word “pizzicato” or just “pizz” is written in the music. When the player has to play with the bow again the word “arco” is written in the music (“arco” is the Italian word for “bow”).

How to play pizzicato

When instruments of the violin family are played pizzicato the player usually plucks the string with the index finger (pointing finger) of the right hand somewhere over the fingerboard. Bassists typically use the index and middle finger. Sometimes the player may rest the thumb on the edge of the fingerboard to keep the hand steady. Sometimes more fingers can be used for particularly fast pizzicato sections. Cellists and double bass players can use the thumb for plucking, especially for playing chords.

Very occasionally violinists may be asked to pluck their instruments holding them down in their laps. This is normally when they are deliberately imitating a guitar.

Very often players have to change very quickly from bowing to plucking and back again. It is easy to play a bowed note and then immediately a plucked note if the bowed note finished near the heel of the bow (the end where the bow is held). If the bowed note finishes near the tip the player needs a moment to get the hand ready to pluck. It can take a little more time to go back to bowing again because the player has to get the bow back into playing position.

If there is a long pizzicato section then it is more comfortable to put the bow down instead of holding it in the right hand all the time. This is fine so long as the player has time to pick the bow up again when it goes back to arco.

The sound of pizzicato

Pizzicato notes sound short and detached (staccato). The player can get different sounds by plucking in different parts of the string. High notes sound very short and dry. Pizzicato notes on the double bass sound much more resonant (big and boomy). Double basses often play pizzicato to give extra rhythmic and harmonic support. For example: in a waltz the cellos and violas might be accompanying the tune with an “um-cha-cha, um-cha-cha” while the double basses just pluck on the “um” (the first beat of the bar). Double basses usually play pizzicato when playing with jazz groups.

One special effect can be made by pulling the string hard and letting it go so that it snaps against the fingerboard. Bartók used this effect several times. This is not the same as jazz bass players who slap the strings at the end of a note (“slap bass”).

All content from Kiddle encyclopedia articles (including the article images and facts) can be freely used under Attribution-ShareAlike license, unless stated otherwise. Cite this article:
Pizzicato Facts for Kids. Kiddle Encyclopedia.