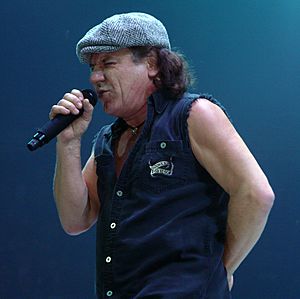 Brian Johnson (born 5 October 1947 in Dunston, Gateshead, England) is an English singer and songwriter. He is best known as the singer for Australian hard rock band AC/DC.

Johnson's father, Allan, was in the British Army's light infantry. His mother, Esther, came from Italy. Johnson has two children from his first marriage. That marriage ended in divorce just before he joined AC/DC in 1980.

Johnson was in the Newcastle glam-rock band Geordie in 1972. The band split up in 1978 but Johnson put it back together in 1980. Just after a record contract had been signed, Johnson was asked to audition for AC/DC.

Johnson joined AC/DC in 1980, after the death of the band's former lead singer Bon Scott. He was the band's first choice. A fan in Cleveland, Ohio had sent a Geordie album to AC/DC after Bon Scott's death. The fan had asked them to consider Johnson. Years earlier, Bon Scott had also praised Johnson's singing and performance style.

Johnson co-wrote all of AC/DC's songs with the Young brothers for ten years.

All content from Kiddle encyclopedia articles (including the article images and facts) can be freely used under Attribution-ShareAlike license, unless stated otherwise. Cite this article:
Brian Johnson Facts for Kids. Kiddle Encyclopedia.