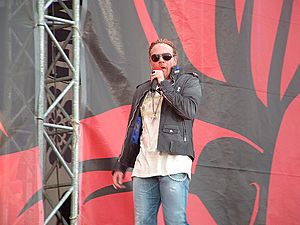 The music they made was different from the rock music that was popular in the 1980s. They played harder rock music. It was also closer to traditional rock. Because of this, many music fans became interested in Guns N'Roses. Guns N'Roses was created in Los Angeles in June, 1985. By singer W. Axl Rose, guitarists Tracii Guns and Izzy Stradlin, bassist Ole Beich and drummer Rob Gardner. Axl's old band was named Hollywood Rose, and Tracii's old band was named L.A. Guns. They joined the two names and got the name Guns N' Roses. 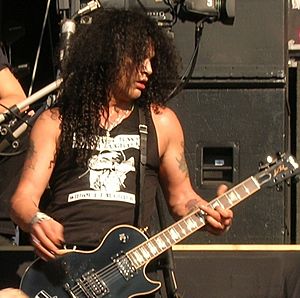 In 1985, Guns N' Roses went to Seattle to perform. Tracii Guns and Rob Gardner could not attend the show. Rose called guitarist Slash and drummer Steven Adler, who were his friends. He asked them for help. They agreed, and became permanent members. On the way back to Los Angeles, the five members wrote the lyrics for 'Welcome to the Jungle' which became one of their most famous songs. Then in 1990 Drummer Steven Adler got fired from the band. He was replaced by The Cult Drummer Matt Sorum.

Since parting ways with the Appetite for Destruction lineup, Rose has remained a constant member and many lineups have changed since. The last studio album the band released was Chinese Democracy, which had been delayed for over ten years, to mixed reactions. In 2016, Slash and Duff rejoined the band, along with the band's first female member, Melissa Reese.

All content from Kiddle encyclopedia articles (including the article images and facts) can be freely used under Attribution-ShareAlike license, unless stated otherwise. Cite this article:
Guns N' Roses Facts for Kids. Kiddle Encyclopedia.