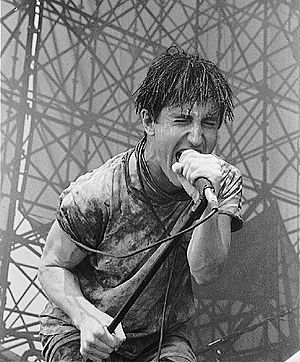 Reznor started playing music when he learned the piano, which he started when he was five years old. He was so good he could maybe have become a pianist if he had wanted to. He also learned saxophone and tuba.

He joined his first band when he was in college, called Option 30. He moved to Cleveland, Ohio, USA in 1985 and joined a band called The Innocent where he played keyboard. In 1986 he joined another band, The Exotic Birds.

All content from Kiddle encyclopedia articles (including the article images and facts) can be freely used under Attribution-ShareAlike license, unless stated otherwise. Cite this article:
Trent Reznor Facts for Kids. Kiddle Encyclopedia.