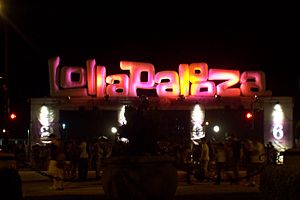 Lollapalooza is a music festival. It was started in 1991 by Perry Farrell, lead singer of Jane's Addiction, as a farewell concert for his band. It happened every year until 1997, then took a break until 2003. There was no 2004 Lollapalooza. In 2005, the festival started again, and kept going every year. From 2005, it has played as a weekend show at Grant Park in Chicago.

All content from Kiddle encyclopedia articles (including the article images and facts) can be freely used under Attribution-ShareAlike license, unless stated otherwise. Cite this article:
Lollapalooza Facts for Kids. Kiddle Encyclopedia.