New Castle is a city in and the county seat of Lawrence County, Pennsylvania, United States, 50 miles (80 km) northwest of Pittsburgh and near the Pennsylvania–Ohio border just 18 miles (29 km) east of Youngstown, Ohio. The population was 23,128 as of the 2010 census. It is the commercial center of a fertile agricultural region. 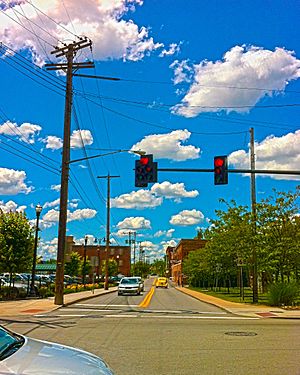 In 1798, John Carlysle Stewart, a civil engineer, traveled to western Pennsylvania to resurvey the "donation lands," which had been reserved for veterans of the Revolutionary War. He discovered that the original survey had neglected to stake out approximately 50 acres (20 ha) at the confluence of the Shenango River and the Neshannock Creek, at that time a part of Allegheny County. Claiming the land for himself, he laid out what was to become the town of New Castle. Stewart laid out the town of New Castle in April 1798. It comprised approximately that same 50 acres (20 ha), in what was then part of Allegheny County.

In 1825, New Castle became a borough, having a population of about 300. The city later became a part of Mercer County. On April 5, 1849, the Governor of the Commonwealth of Pennsylvania signed an act creating Lawrence County named in honor of U.S. Navy Captain James Lawrence. New Castle became a city in 1869 and was headed by its first Mayor, Thomas B. Morgan. At that time, the population had increased to about 6,000.

In 1849, a group of Old Order Amish families from Mifflin County, Pennsylvania, settled just north of New Castle in New Wilmington. Later migrations from Holmes County, Ohio would make this Amish community one of the largest in Pennsylvania. Approximately 2,000 Amish live and work presently in the townships north of New Castle.

Business in New Castle began to flourish in the early 19th century with the construction of the canal system, which made its way through the city. Numerous manufacturing plants became located in New Castle because of the availability of transportation facilities and ready access to raw material markets. The canal system was later supplemented and then replaced by railroads which offered greater speed and capacity for freight, as well as year round service.

In the 1870s, the city became a major hub of the Pittsburgh and Lake Erie Railroad. New Castle's population swelled from 11,600 in 1890 to 28,339 in 1900, and to 38,280 in 1910, as immigrants, particularly from Italy, flocked to the city to work in the mills and nearby limestone quarries. Italian laborers of the era were frequent victims of the Black Hand society, which employed blackmail and extortion to rob the workers of their pay. In 1907 the headquarters of the Black Hand for the entire region was discovered in the village of Hillsville a few miles west of New Castle. By this time New Castle was one of the fastest-growing cities in the country, and with the construction of the largest tin plate mill in America, the city became the tin plate capital of the world. The tin plate industry marked a new increase in the city's prosperity.

In 1908 New Castle was linked to Pittsburgh by the Pittsburgh, Harmony, Butler and New Castle Railway, an interurban trolley line. Steel and paper mills, foundries, a bronze bushing factory, and car-construction plants contributed to the economy. In addition, the Shenango China produced commercial china and created the fine Castleton china line for the White House, including dinnerware for Presidents Dwight D. Eisenhower and Lyndon B. Johnson. Other ceramic factories produced bathroom fixtures and industrial refractory materials.

In the 1920s, New Castle enjoyed its greatest prosperity. The landscape of the city was transformed with the building of many beautiful structures, some of which still stand, such as The Cathedral, St. Mary's Church, and the Castleton Hotel. The city also established its identity. New Castle is known both as the "hot dog capital of the world" and the "fireworks capital of America". Its chili dogs are the product of Greek immigrants who came to New Castle in the early 20th century and established restaurants along with their homes. The notoriety for fireworks is credited to two local fireworks companies of international stature, S.Vitale Pyrotechnic Industries, Inc. (Pyrotecnico) and Zambelli Internationale.

In the 1930s, the city, along with most cities of America, suffered during the Great Depression. During this trying time, the federal government established the Works Progress Administration (WPA) and the Civilian Conservation Corps (CCC). These programs offered jobs to many displaced workers. Many of the stone walls built by the WPA and the CCC still stand as a reminder of the historic demise of the economy.

In the 1940s, industry temporarily surged during wartime.

In 1998, the City of New Castle was a host city for the History Channel Great Race. Over 15,000 spectators gathered downtown for the festivities. The city celebrated its 200th birthday in 1998 with a downtown fireworks festival that attracted over 30,000 people.

The first fireworks manufacturer in New Castle was Leopold Fazzoni, who owned and operated the Fazzoni Brothers Fireworks Company. Mr. Fazzoni came to New Castle from Italy in 1886 and worked in the tin mills to earn enough money to start his own business. Mr. Fazzoni was issued the first certificate for fireworks manufacturing in the Commonwealth of Pennsylvania. Of the people who worked with the Fazzoni family, many founded their own businesses, such as: Paul Rozzi, Jacob Conti, Constantino Vitale, and Joseph Zambelli.

Despite recent economic challenges, the city continues to serve as the headquarters of Pyrotecnico Fireworks, the winner of the 2008 Gold Jupiter, awarded at the world's most prestigious fireworks venue: LaRonde in Montreal, Canada. Started by Constantino Vitale in Italy in 1889, Constantino immigrated to New Castle continuing his business there in the 1920s. Five generations of the Vitale family have transformed the company. In the 1990s the company's name was changed to Pyrotecnico and has grown to be a world leader in the industry. Also located in New Castle is Zambelli Fireworks, which was founded in New Castle. Zambelli Fireworks is one of the world's leading fireworks and pyrotechnics companies. These fireworks companies have been featured in venues such as presidential celebrations and Super Bowls. Pyrotecnico and Zambelli Fireworks have changed the face of the fireworks industry. This has gained the city the nickname of "Fireworks Capital of America". New Castle has recently opened Zambelli Plaza near the Cascade Center in 2007 in honor of the Zambelli family's accomplishments.

New Castle has public transportation in the form of the New Castle Transit Authority, which provides bus service to patrons around the city and makes three daily trips to Pittsburgh.

All content from Kiddle encyclopedia articles (including the article images and facts) can be freely used under Attribution-ShareAlike license, unless stated otherwise. Cite this article:
New Castle, Pennsylvania Facts for Kids. Kiddle Encyclopedia.