Holmes County is a county located in the U.S. state of Ohio. As of the 2020 census, the population was 44,223. Its county seat is Millersburg. The county was formed in 1824 from portions of Coshocton, Tuscarawas and Wayne counties and organized the following year. It was named after Andrew Holmes, an officer killed in the War of 1812.

Holmes County, which was about 42% Amish in 2010, is home to the second largest Amish community (after Lancaster County, Pennsylvania) in the world, which draws many visitors to the county.

Holmes County was formed on January 20, 1824 from portions of Coshocton, Tuscarawas and Wayne counties. It was named after Andrew Holmes, an officer in the War of 1812. During the Civil War, small-scale riots broke out in ethnic German areas. Holmes County was an isolated localistic area dominated by Pennsylvania Dutch and some recent German immigrants. It was a Democratic stronghold and few men dared speak out in favor of conscription. Local politicians denounced Lincoln and Congress as despotic, seeing the draft law as a violation of their local autonomy. In June 1863, small scale disturbances broke out; they ended when the Army sent in armed units. 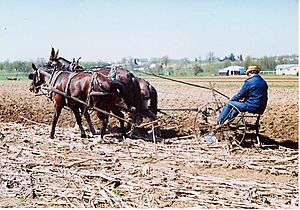 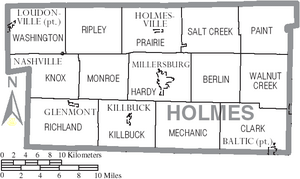 Map of Holmes County, Ohio with Municipal and Township Labels 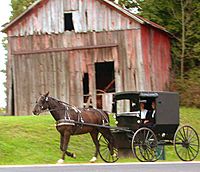 Amish couple in a horse-drawn buggy in rural Holmes County

A large Amish community of about 36,000 exists in Northeast-Central Ohio, centered on Holmes County and extending into surrounding counties. The Holmes Old Order Amish affiliation with 140 church districts out of 221 in the Holmes County Amish settlement in 2009 is the main and dominant Amish affiliation. Holmes County houses the highest percentage of Amish of any U.S. county, currently 42 percent of the population, and experts speculate that within 15 years Holmes County may be the first majority Amish county. The Amish & Mennonite Heritage Center in Berlin explains traditional ways of the Amish and provides an illustrated history for visitors in its 10-foot-by-265-foot mural.

The overall Amish population of the area, centered on Holmes County, is the largest Amish community in the world. Called locally "Amish Country", it draws many visitors to the county, thus making tourism an important sector of the local economy.

Tourism is an important part of the economy. In 2017, Holmes County was the second most popular tourist destination in Ohio. Tourism is centered on the Amish community, which makes up almost half the county's population, the highest density in the world.

All content from Kiddle encyclopedia articles (including the article images and facts) can be freely used under Attribution-ShareAlike license, unless stated otherwise. Cite this article:
Holmes County, Ohio Facts for Kids. Kiddle Encyclopedia.