Wayne County is a county in the U.S. state of Ohio. As of the 2020 census, the population was 116,894. Its county seat is Wooster. The county is named for General "Mad" Anthony Wayne. Wayne County comprises the Wooster, OH Micropolitan Statistical Area.

There were several large waves of migration into what it is today Wayne County, Ohio. The first wave was groups of families from New England, migrating westward into what was then the Northwest Territory and then early statehood era Ohio between the 1790s and the 1820s. Most of the settlers who arrived in what would become Wayne County at that time were from New England. They were overwhelmingly Congregationalists, however, in the 1810s several arrived who had become Methodists, Baptists and Presbyterians during the Second Great Awakening. These groups were of English ancestry, being descended from the English Puritans who arrived in colonial New England during the 1620s and 1630s. The English-descended "Yankee" New Englanders established the county in 1812. The second large migration was German immigrants, the Germans settled in Wayne County in large numbers between the 1820s and the 1880s, forming a steady stream of migration into the county during that time. These immigrants were almost exclusively Lutheran. Lastly in the early 1850s a large group of Irish immigrants arrived in the county as part of a large wave of migration entering the United States at that time. This group was overwhelmingly Catholic. Many families currently in Wayne County go back to the early 19th century settlement of the county by New Englanders. Today, many of these same people who cite that they are of "American" ancestry are actually of English descent, however, they have families that have been in the state so long, in many cases since the colonial period, that they choose to identify simply as having "American" ancestry or do not, in fact, know their own ancestry. Their ancestry primarily goes back to the original Thirteen Colonies and for this reason many of them today simply claim "American" ancestry, though they are of predominantly English ancestry. There are also many Irish-Americans in the county. German-Americans have formed the largest single group in Wayne County since the late 1800s. 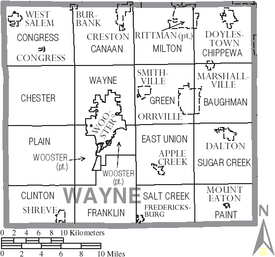 Map of Wayne County, Ohio with municipal and township labels

All content from Kiddle encyclopedia articles (including the article images and facts) can be freely used under Attribution-ShareAlike license, unless stated otherwise. Cite this article:
Wayne County, Ohio Facts for Kids. Kiddle Encyclopedia.