Kids Encyclopedia Facts
Not to be confused with Burton, Ohio. 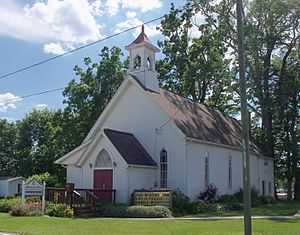 Burton City is an unincorporated community in Wayne County, in the U.S. state of Ohio.

Burton City was originally called Fairview, and under the latter name was laid out in 1850. A post office called Baughman was established in 1852, the name was changed to Burton City in 1872, and the post office closed in 1918.

All content from Kiddle encyclopedia articles (including the article images and facts) can be freely used under Attribution-ShareAlike license, unless stated otherwise. Cite this article:
Burton City, Ohio Facts for Kids. Kiddle Encyclopedia.