Burton is a village in Geauga County, Ohio, United States. The population was 1,452 at the 2010 census. Burton is the location of Century Village, run by the Geauga Historical Society. The museum village is composed of 19th-century buildings moved there from other locations. Many special events are held there each year, as well as at the Geauga County Fairgrounds, also in Burton. 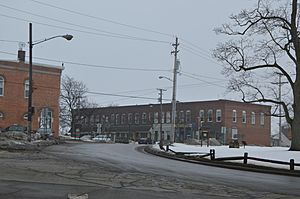 Burton was founded in 1798 and is Geauga County's oldest settlement. Like many other early settlements in the Connecticut Western Reserve, Burton has a town square patterned after the village greens of New England.

In 1972, an incident in Burton lead to a U.S. Supreme Court case. Hugo Zacchini performed a human cannonball act at Burton's annual Geauga County Fair and WEWS-TV recorded and aired the entire act against his wishes and without compensating him, as was required by Ohio law. In Zacchini v. Scripps-Howard Broadcasting Co., the high court ruled in 1977 that the First Amendment did not shield the broadcaster from liability from common law copyright claims.

According to the United States Census Bureau, the village has a total area of 1.05 square miles (2.72 km2), all land.

There were 581 households, of which 29.4% had children under the age of 18 living with them, 44.4% were married couples living together, 12.9% had a female householder with no husband present, 5.0% had a male householder with no wife present, and 37.7% were non-families. 31.0% of all households were made up of individuals, and 12.6% had someone living alone who was 65 years of age or older. The average household size was 2.32 and the average family size was 2.92.

Burton hosts the Apple Butter festival every fall, and is home to the Great Geauga County Fair, held every Labor Day weekend.

Local elementary and secondary public education is provided by the Berkshire Local School District, which also serves the surrounding communities of Burton Township, Claridon Township and Troy Township. The school district's one high school, Berkshire High School, is located just north of Burton's town square. The district's only elementary school is located in Burton. The Claridon Elementary School was closed in 2005, and the Troy Elementary School was closed in 2009.

All content from Kiddle encyclopedia articles (including the article images and facts) can be freely used under Attribution-ShareAlike license, unless stated otherwise. Cite this article:
Burton, Ohio Facts for Kids. Kiddle Encyclopedia.