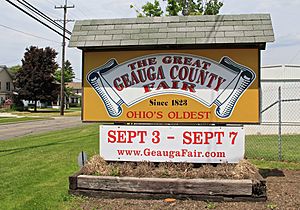 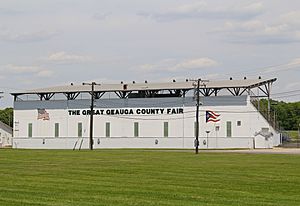 The Great Geauga County Fair is Ohio's oldest continuous county fair and home to one of the oldest existing agricultural societies in America. It is held annually in Burton, Ohio every Labor Day weekend as a "grand finale" to the summer. It has been around for almost 190 years, and each year nearly a quarter of a million people of all ages come to enjoy the more than 12,000 exhibits, animals, rides, food, music, entertainment and special attractions which are featured, as billed in the Fair's motto "Something for Everyone Since 1823". 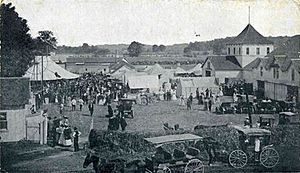 The Geauga County Agricultural and Manufacturing Society was formed in February 1823 to "promote Agriculture & Domestic Manufactures" and held the first annual fair on the square in Chardon, Ohio on October 23. The early fairs were alternately held in Burton and Chardon, with at least one fair held in Painesville, Ohio prior to the separation of Lake County from Geauga County in 1840. It has been held exclusively in Burton since the permanent establishment of the official county fairgrounds in the mid-1800s.

Many of the buildings on the grounds used today date back to the nineteenth century, such as: 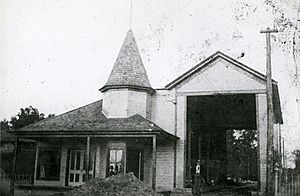 Hugo Zacchini performed a human cannonball act at the fair in 1972. WEWS-TV recorded and aired the entire act against his wishes and without compensating him, as was required by Ohio law. In Zacchini v. Scripps-Howard Broadcasting Co., the U.S. Supreme Court ruled that the First Amendment did not shield the broadcaster from liability from common law copyright claims.

There are over 300 vendors and concessionaries providing delicious fair food and amazing products and services. Enjoy live music, shows and demonstrations daily. In 2017, there will be magic shows, pig races and The Flying Pages Aerial Thrill Show - over 65 events. Main Grandstand Events include: Demolition derby, Tractor and Truck Pull, Broken Horn Rodeo, Horse Pulling, Harness Racing and the Band-O-Rama where local bands and cheerleaders perform. View the Daily Schedule at [1]

Demolition derby is a motor sport that is held at most fairs around the world. The races include up to five drivers that dodge their vehicles into one another and the last vehicle that is left is declared the winner.

Truck and Tractor Pull consists of street licensed 4x4 trucks weighing up to 8,000 pounds pulling item that are up to 10,000 or more pounds [2]

Attendees must purchase tickets to see the Demolition Derby, Truck Pull and Rodeo - available online at [3]

The Foundation Board includes:

Each year there is an election held for new fair officers. There is also a board of twenty-one elected fair directors. Each fair director is elected from different townships with each holding a term for up to three years. The elected fair officials for the year of 2014 are as follows;

All content from Kiddle encyclopedia articles (including the article images and facts) can be freely used under Attribution-ShareAlike license, unless stated otherwise. Cite this article:
Geauga County Fair Facts for Kids. Kiddle Encyclopedia.