Geauga County ( jee-AW-gə) is a county in the U.S. state of Ohio. As of the 2020 census, the population was 95,397. The county seat is Chardon. The county is named for an Onondaga or Seneca language word meaning 'raccoon', originally the name of the Grand River.

Geauga County is part of the Cleveland-Elyria, OH Metropolitan Statistical Area. In 2008, Forbes Magazine ranked Geauga County as the fourth best place in the United States to raise a family.

Geauga County is named after the Onondaga word jyo’ä·gak or Seneca jo’ä·ka, both meaning 'raccoon' (originally the name of the Grand River).

After the discovery of the New World, the land that became Geauga County was originally part of the French colony of Canada (New France), which was ceded in 1763 to Great Britain and renamed Province of Quebec. In the late 18th century the land became part of the Connecticut Western Reserve in the Northwest Territory, and then was purchased by the Connecticut Land Company in 1795.

Geauga County was founded on March 1, 1806 as the second county in the Connecticut Western Reserve, originating from Trumbull County, Ohio. In 1808, the size of Geauga County was reduced by the creation of Ashtabula County, Cuyahoga County, and Lake County.

The present-day boundaries were established in 1840 following the creation of Lake County. A disagreement about the location of the county seat began in 1808 when commissioners from Trumbull County began the process of identifying the seat of justice. Residents in the northern townships wanted the seat in Champion, renamed Painesville, Ohio in 1832. Residents in southern townships desired a centrally located county seat and took advantage of a tract of land donated by Peter Chardon Brooks called Chardon, Ohio. Despite Chardon being selected in 1809, the argument was never really settled. Over the next two decades, population growth in the seven northern townships exceeded the remaining sixteen southern townships, further fueling the disagreement. On January 21, 1840, a petition to create Lake County from seven townships in northern Geauga County and Willoughby Township from Cuyahoga County were presented to the Ohio House of Representatives. Seabury Ford presented petitions against its creation. Lake County was established in March 1840 by the Ohio state legislature. As the newly formed Lake County did not have sufficient territory to meet the requirements for a county, the northern border included submerged land beneath the waters of Lake Erie.

The first settlement in Geauga was at Burton, Ohio in the year 1798, when three families settled there from Connecticut.

Geauga County receives the most precipitation of any county in northern Ohio, with most of the county receiving over 42 inches annually in an average year, and some parts exceeding 44 inches.

The geography of Geauga County was radically changed by Illinoian and Wisconsinan glaciation, which is evident in the deranged drainage system, landscape change, and glacial till. The headwaters of three watercourses in the Lake Erie basin are in Geauga County. These include the Cuyahoga River, Chagrin River, and Grand River. Portions of all three are designated Ohio Scenic Rivers.

Point sources of the Grand River are in Parkman Township, Troy Township, and Swine Creek in Middlefield Township.

There is a large Amish community founded in 1886 in Geauga County. It is the fourth largest of all Amish settlements with 18,650 people in 132 congregations in 2017. In 2017 the Amish accounted for 19.8% of Geauga County's population.

The mostly rural nature of Geauga County limits the feasibility of a fixed-route transit system. Instead, Geauga County Transit offers a demand-responsive door-to-door transit system within the county with some out-of-county service. As of 2015[update], one-way fares for door-to-door service were $6.00, with 50% discounts for the elderly, disabled, or children 6 years to 17 years old. Children 5-years and younger are free. Out-of-county fares are two times the posted in-county fares. Service is provided 6:00 AM to 9:00 PM Monday through Friday. Reservations are suggested with at least three days notice, but can be made up to one week in advance.

The Geauga County Airport sits on 41 acres purchased by the Middlefield Chamber of Commerce and donated to Geauga County. Ground was broken August 31, 1967 and it was officially opened September 29, 1968. The airport has one 3500' long by 65' wide runway. Runway numbers are 11 on the west end and 29 on the east end. There are two T-hangars, one private hangar, two community hangars, a pilot lounge and restroom facility.

The Geauga County Educational Service Center provides collaborative programs and services for the seven local school districts in Geauga County, leveraging resources to reduce overall costs to each district. The ESC has formed a P-16 bridge initiative whose mission is to create workforce readiness in our youth and adults through substantive partnerships between educators, businesses, community organizations, parents focusing on important transitions experienced at each level. Geauga County P-16 will develop a sustainable process and program to insure its continued success. 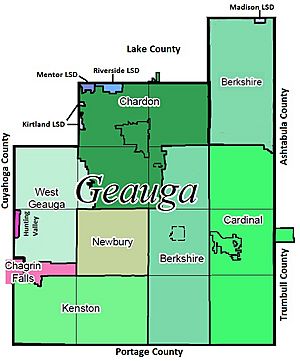 In addition, there are five neighboring public school districts that serve portions of Geauga County residents.

Taxpayers in six of the seven school districts in Geauga County support a Joint Vocational School District (JVSD) at the Auburn Career Center in Concord Township, Ohio. The career center offers a variety of programs in health, education, and hands-on technology.

Geauga County has one institution of higher learning: 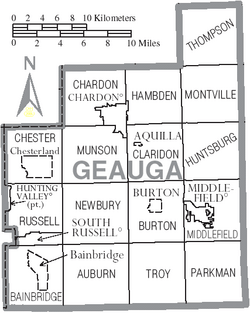 Map of Geauga County, Ohio with Municipal and Township Labels

All content from Kiddle encyclopedia articles (including the article images and facts) can be freely used under Attribution-ShareAlike license, unless stated otherwise. Cite this article:
Geauga County, Ohio Facts for Kids. Kiddle Encyclopedia.