Middlefield is a village in Middlefield Township, Geauga County, Ohio, United States. The population was 2,690 at the 2010 census.

Middlefield is known for being the center of the world's fourth largest Amish settlement, and its significant manufacturing base, which includes Gold Key Processing, Inc., Duncan Toys and KraftMaid.

Because of its central location, home of the areas' public schools and prominent business and retail presence, Middlefield village is considered the hub community for Huntsburg, Parkman, and Middlefield Townships, home to approximately 15,000 total residents.

Once named "Batavia," the village received its current name because it was the midway point between Painesville and Warren. Middlefield was established in 1799 by James Thompson and his father, Isaac Thompson, and incorporated in 1901.

In 1818, James Johnson, who settled at today's Johnson Corners, built a hotel. This hotel, later named The Century Inn, is currently the home of the Middlefield Historical Association. The Historical Association operates a small railroad museum in the summers, The Depot, focused on the 1873 narrow gauge railway between Painesville and Warren.

The Middlefield Library, a branch of the Geauga County Public Library, was opened in 1942.

In 2005, Wal-Mart opened a Supercenter in the village. Catering to the local Amish population, the Supercenter has an expanded parking lot that includes 37 hitching posts for Amish buggies. Also, the store is stocked with blocks of ice and fabrics for clothes to be made at home. 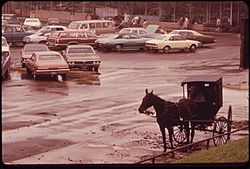 Middlefield is the center of the world's fourth largest Amish settlement, but very few actually live within the Village limits.

All content from Kiddle encyclopedia articles (including the article images and facts) can be freely used under Attribution-ShareAlike license, unless stated otherwise. Cite this article:
Middlefield, Ohio Facts for Kids. Kiddle Encyclopedia.