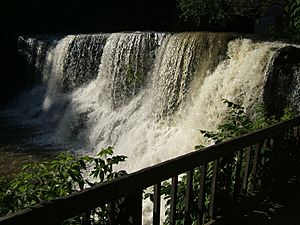 Chagrin Falls is a village in Cuyahoga County, Ohio, United States and is a suburb of Cleveland in Northeast Ohio's Cleveland-Akron-Canton metropolitan area, the 15th-largest Combined Statistical Area nationwide. The village was established and has grown around Chagrin Falls waterfall on the Chagrin River. As of the 2010 census, the village population was 4,104. The village was incorporated in 1844 from parts of three townships in two counties. Neighboring Chagrin Falls Township was established in 1845.

Chagrin Falls was laid out in 1837. The community takes its name from a waterfall on the Chagrin River in the middle of town.

Chagrin Falls High School was rated 97th in Newsweek's "Complete List of the 1,200 Top U.S. Schools" in 2006. This study was based largely on the ratio of Advanced Placement or International Baccalaureate tests taken to the number of graduating high school seniors. Also in 2006, the Chagrin Falls district was given an "Excellent" rating for the sixth year in a row by Newsweek. On December 4, 2008, Chagrin Falls High School was once again ranked in the top 100 public high schools in the country. The school was rated 98th with a Quality-Adjusted Exams Per Test Taker ratio of 3.8. It is regularly ranked as the top high school in Northeast Ohio.

All content from Kiddle encyclopedia articles (including the article images and facts) can be freely used under Attribution-ShareAlike license, unless stated otherwise. Cite this article:
Chagrin Falls, Ohio Facts for Kids. Kiddle Encyclopedia.