Thomas Daniel "Tim" Conway (December 15, 1933 – May 14, 2019) was an American comedic actor, writer and director. He portrayed the inept Ensign Parker in the 1960s World War II situation comedy McHale's Navy, was a regular cast member on the 1970s variety and sketch comedy program The Carol Burnett Show, co-starred with Don Knotts in several films in the late 1970s and early 1980s, starred as the title character in the Dorf series of sports comedy films, and provided the voice of Barnacle Boy in the animated series SpongeBob SquarePants.

Particularly admired for his ability to depart from scripts with spontaneously improvised character details and dialogue, Conway won six Primetime Emmy Awards during his career – four of which were awarded for The Carol Burnett Show, including one for writing. In 2002, Conway was inducted into the Television Hall of Fame. 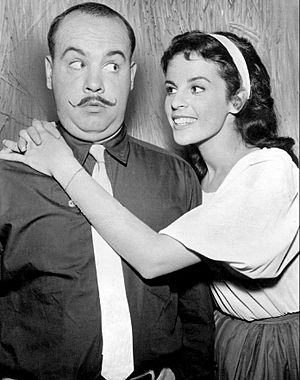 Conway was born in Willoughby, Ohio, a suburb of Cleveland, and grew up in nearby Chagrin Falls. He was of Irish descent on his father's side and Romanian on his mother's.

Conway attended Bowling Green State University in Bowling Green, Ohio, where he majored in television and radio and was a disc jockey, and member of the Phi Delta Theta Fraternity. When he graduated, Conway enlisted in the United States Army, where he served between 1956–1958.

After his discharge from the Army, Conway returned to Cleveland and worked with Ernie Anderson on KYW-TV, an NBC affiliate, in 1958 and 1959. From 1960 to 1962, he was on WJW-TV (then a CBS affiliate, now a Fox affiliate) on a weekday morning film show (under the Ernie's Place banner), where he also wrote material for the comedic skits shown during film intermissions. Conway also recorded a comedy album with Anderson, who himself gained national prominence as a voice over announcer for ABC Television in the 1970s.

After he became famous, Conway acted on Cleveland television on the Hoolihan and Big Chuck and Big Chuck and Lil' John shows on WJW-TV, in guest spots and occasional skits. Conway also made regular guest appearances at numerous "Ghoulardifest" functions held by WJW over the years, along with former Cleveland TV personality Bob "Hoolihan" Wells. 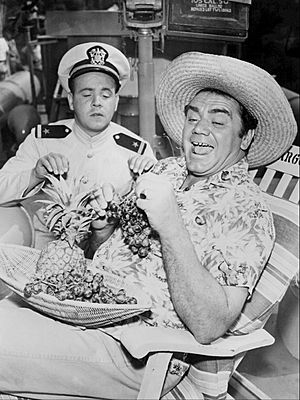 Conway and Ernest Borgnine in a photograph of McHale's Navy 1962

Comedic actress Rose Marie visited WJW in 1961 for The Dick Van Dyke Show. She viewed tapes of some of Anderson and Conway's skits and proceeded to take Conway under her wing. Conway moved to New York City where he gained a spot on, ABC's The Steve Allen Show as a regular player. Conway (who by this point had officially changed his first name to Tim) continued on the show through its entire run. 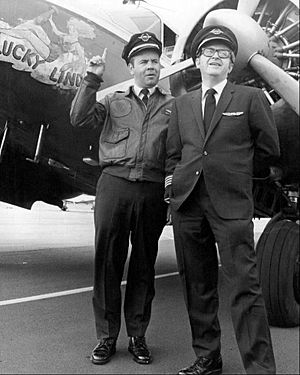 In 1970, The Tim Conway Show paired Conway with Joe Flynn of McHale's Navy in a sitcom as owner-pilots of a one-plane (a Beechcraft Model 18 named Lucky Linda) airline operated by the pair. It debuted in January 1970 and the last new show aired in June 1970. In the fall of the same year, Conway was given his own hour-long variety show, The Tim Conway Comedy Hour which lasted 13 weeks.

Beginning in 1975, Conway was often paired with Don Knotts in family films from Disney, including The Apple Dumpling Gang and its 1979 sequel, The Apple Dumpling Gang Rides Again. They also starred in two independent films, a boxing comedy called The Prize Fighter in 1979, and a 1980 mystery comedy film called The Private Eyes. In 1983, he starred in another television show, Ace Crawford, Private Eye, a comedic detective series. 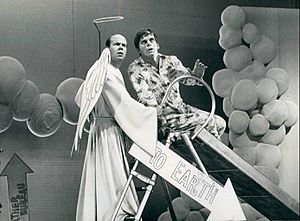 Conway as an angel with Robert Morse on That's Life, 1968

In 1980, Conway again was given his own one-hour variety program, titled The Tim Conway Show. It debuted on March 22, 1980. It was originally a full hour but was reduced to half an hour, it end in August 1981. The format was similar to that of The Carol Burnett Show, with several regular cast members performing in comedy sketches.

In the spring of 1983, Conway starred in another situation comedy, Ace Crawford, Private Eye; a humorous detective show. In the summer of 1990, he starred in Tim Conway's Funny America, playing pranks in disguise on unsuspecting passersby around the United States while hidden cameras recorded the results, which Conway presented to a studio audience.

In the 1980s, Conway began appearing in a series of funny how-to videos in which he plays Dorf. In 2010, all of the Dorf films were remastered in a DVD Collection featuring all eight films, a behind-the-scenes with Dorf, and a commentary track by Tim Conway. 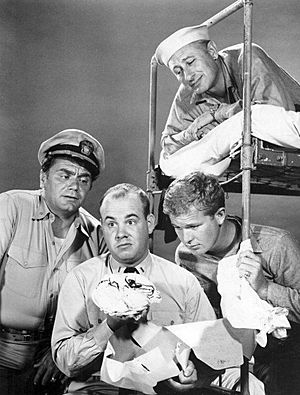 He has lent his voice to other TV shows including The Simpsons, Disney spin-off Hercules, Lloyd in Space, The Wild Thornberrys, Cybill, What's New, Scooby-Doo?, The Proud Family, Scooby-Doo! Pirates Ahoy!, Caillou, and What's with Andy?. He also narrated The Secret Shortcut in Reading Rainbow and hosted The Flintstones' 25th Anniversary Celebration. He has also starred in a Disney films.

Starting in 2003, Conway teamed up with good friend Don Knotts again to provide voices for the direct-to-video children's series Hermie and Friends, which continued until Knotts' death in 2006. Conway continued to do the series. 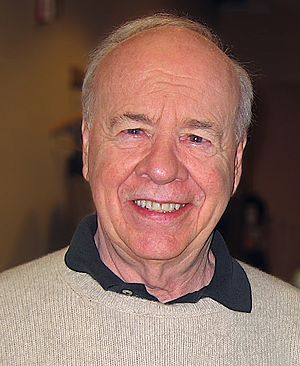 Conway was married twice. He was married to Mary Anne Dalton from 1961 until 1978; they had six children together. He was married to Charlene Fusco from May 18, 1984 until his death. Among Conway's children is KFI Los Angeles radio host Tim Conway, Jr. Conway and his second wife, Charlene, lived in Encino, California.

A fan of thoroughbred horse racing, and an occasional racehorse owner, Conway was the co-founder and vice-president of the Board of Directors of the Don MacBeth Memorial Jockey Fund.

In late 2013, his memoir, What's So Funny?: My Hilarious Life, was on The New York Times Best Seller list its first week on sale.

In 2018, Conway was diagnosed with dementia and began using a wheelchair, also at this time he had brain surgery. Conway died in a long-term-care facility on May 14 in Los Angeles, at the age of 85.

All content from Kiddle encyclopedia articles (including the article images and facts) can be freely used under Attribution-ShareAlike license, unless stated otherwise. Cite this article:
Tim Conway Facts for Kids. Kiddle Encyclopedia.