The Wild Thornberrys facts for kids

Kids Encyclopedia Facts
This page is about the series. For the 2002 film, see The Wild Thornberrys Movie.

The Wild Thornberrys is an American animated television series that originally aired on Nickelodeon from 1998 to 2004.

The series portrays a family of wildlife documentary filmmakers known as the Thornberrys; in particular the younger daughter Eliza, and her ability to communicate with animals.

This is me, Eliza Thornberry, part of your average family. I've got a dad, a mom, and a sister. There is Donnie, we found him. And Darwin, he found us. Oh, yeah, about our house. It moves, because we travel all over the world. You see, my dad hosts this nature show, and my mom shoots it. Okay, so we're not that average. And between you and me, something amazing happened... and now I can talk to animals. It's really cool, but totally secret. And you know what? Life's never been the same.

The series focuses around a nomadic family of documentary filmmakers known as the Thornberrys, famous for their televised wildlife studies. It primarily centers on the family's younger daughter Eliza, and her secret gift of being able to communicate with animals, which was bestowed upon her after having rescued a shaman masquerading as a trapped warthog.

The gift enabled her to talk to the Thornberrys' pet chimpanzee Darwin. Together, the pair frequently venture through the wilderness, befriending many species of wild animals along the way or realizing moral truths and lessons through either their experiences or a particular animal species's lifestyle, or simply assisting the creatures, by which they become acquainted, in their difficulties. 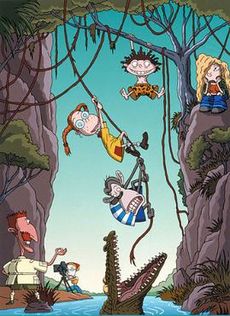 The Wild Thornberrys was produced by Klasky Csupo for Nickelodeon. It premiered on September 1, 1998, and was the first Nicktoon to exclusively use 22-minute stories (episodes of other Nicktoons usually featured two 10 – 11-minute stories, using 22-minute stories only on occasion).

The series was designed to have a focus on parents, after focus groups run by Klasky and Csupo uncovered that children were talking about the real struggles of the parent-child relationship; this was opposed to Nickelodeon's view of only featuring kids in children's programming.

Nickelodeon released all five seasons on DVD in Region 1 via Amazon.com through its CreateSpace Manufacture-on-demand program in 2010. Season 1 was released on June 24, 2010, and Seasons 2 through 5 were released on December 1, 2010.

On December 1, 2015, Shout! Factory released The Wild Thornberrys: The Complete Series on DVD in Region 1.

In Australia, all 5 seasons have been released via Beyond Home Entertainment. A 13-disc set titled The Wild Thornberrys: The Essential Episodes was released on June 3, 2015.

The franchise was extended through three movies (one television film and two theatrical films), which were released toward the end of the series' run:

All content from Kiddle encyclopedia articles (including the article images and facts) can be freely used under Attribution-ShareAlike license, unless stated otherwise. Cite this article:
The Wild Thornberrys Facts for Kids. Kiddle Encyclopedia.