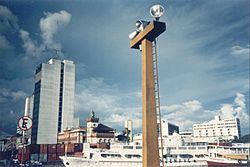 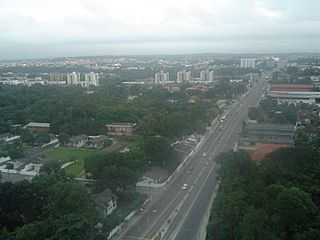 View of the city of Manaus, the city centre is in the back of the image 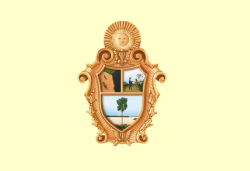 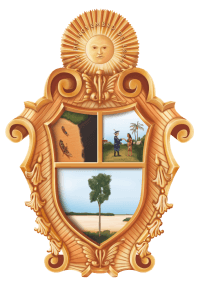 Manaus is the principal city of the North Region of Brazil. It is the capital of Amazonas. Manaus had a great age when latex was discovered in the Amazon region. Manaus developed economically and culturally. After that great age, latex started to be produced in other countries, particularly Malaysia and Indonesia, where due the similar climate the plants start to grow even faster than in Brasil.

Manaus is considerated as the entrance door to the biggest ecological reservation in the planet: The Amazon rainforest. Its name come from a tribe called Manaós that lived in this area and means "Mother of God". The colonization started on 1669, with a small fort, and around it grew a settlement. In 1833 it became a village, with the name of Manaus. On October 24th of 1848 it receive the name of city and became the Capital of the state.

Manaus is the site of the "encontro of the waters" where two big rivers Rio Negro (black river) and Solimoes River come together and for more than 10 km "walk together but not mixed" because of their differing density, and then become the Amazon.

The American Charles Goodyear, inventor of vulcanization, developed a procedure to process the juice of the rubber tree into rubber. The city became rich, and India rubber barons paid for a big biggest luxury from Europe, a copy the Grand Paris Opéra - the TEATRO AMAZONAS. Other monuments from this time include the MERCADO MUNICIPAL, a copy of the famous market halls Les Halles in Paris, the arts centre RIO PALACIO NEGRO between fascinating Portuguese facades.

Today Manaus is a foreign trade zone. Foreign enterprises pay here no import duties what guarantees a certain income for the city and the region. Electronics, wood industry and oil refineries have settled in the outskirts in industrial areas. The harbour is the most important trading centre for the care of the city with regional, national and international products. Over 2 million people live in Manaus. It was nominated as one of the places for the Soccer World Cup 2014.

The Opera house is the major cultural heritage of the Amazonas. It was inaugurated in 1896 during the rubber boom. In spite of the predominance of neoclassic elements, other styles were used, so the architecture is eclectic, with materials brought from Europe as well as artists like Domenico de Angelis, Giovanni Capranesi and Crispim do Amaral. Preserved as a national heritage since 1965, today, with more than 100 years, it has room for 681 people including balconies and three floors of boxes. After the restauration made by the state government in 1990, the theater rescued its splendor, with performances of famous operas, national and international musicians.

All content from Kiddle encyclopedia articles (including the article images and facts) can be freely used under Attribution-ShareAlike license, unless stated otherwise. Cite this article:
Manaus Facts for Kids. Kiddle Encyclopedia.