The Brazil nut (Bertholletia excelsa) is a South American tree in the family Lecythidaceae, and it is also the name of the tree's commercially harvested edible seeds. It is one of the largest and longest-lived trees in the Amazon rainforest. The fruit and its nutshell – containing the edible Brazil nut – are relatively large, possibly weighing as much as 2 kg (4 lb 7 oz) in total weight. As food, Brazil nuts are notable for diverse content of micronutrients, especially a high amount of selenium. The wood of the Brazil nut tree is prized for its quality in carpentry, flooring, and heavy construction. 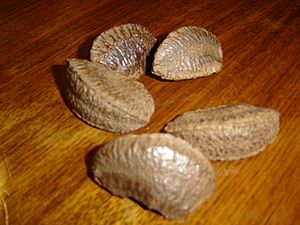 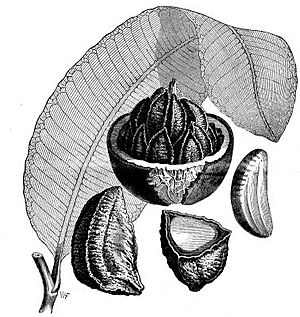 In various countries of South America, Brazil nuts are called castañas de Brasil or nuez de Brasil. In central Brazil, they are usually simply called "castanha," though they may also be called castanhas-do-pará (meaning "chestnuts from Pará").

The Brazil nut family, the Lecythidaceae, is in the order Ericales, as are other well-known plants such as blueberries, cranberries, sapote, gutta-percha, tea, phlox, and persimmons. The tree is the only species in the monotypic genus Bertholletia, named after French chemist Claude Louis Berthollet.

The Brazil nut is a large tree, reaching 50 m (160 ft) tall and with a trunk 1 to 2 m (3 ft 3 in to 6 ft 7 in) in diameter, making it among the largest of trees in the Amazon rainforest. It may live for 500 years or more, and can often reach a thousand years of age. The stem is straight and commonly without branches for well over half the tree's height, with a large, emergent crown of long branches above the surrounding canopy of other trees.

The bark is grayish and smooth. The leaves are dry-season deciduous, alternate, simple, entire or crenate, oblong, 20–35 cm (8–14 in) long, and 10–15 cm (4–6 in) broad. The flowers are small, greenish-white, in panicles 5–10 cm (2–4 in) long; each flower has a two-parted, deciduous calyx, six unequal cream-colored petals, and numerous stamens united into a broad, hood-shaped mass.

The Brazil nut is native to the Guianas, Venezuela, Brazil, eastern Colombia, eastern Peru, and eastern Bolivia. It occurs as scattered trees in large forests on the banks of the Amazon River, Rio Negro, Tapajós, and the Orinoco.

As a result, they can be found outside production areas, in the backyards of homes and near roads and streets in the Northern and Northeastern Brazil. The fruit is heavy and rigid; when the fruits fall, they pose a serious threat to vehicles and people passing under the tree. 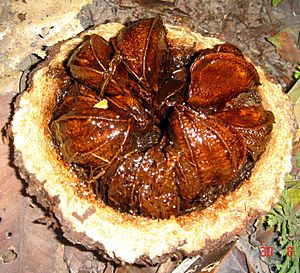 Brazil nut trees produce fruit almost exclusively in pristine forests, as disturbed forests lack the large-bodied bees of the genera Bombus, Centris, Epicharis, Eulaema, and Xylocopa, which are the only ones capable of pollinating the tree's flowers, with different bee genera being the primary pollinators in different areas, and different times of year. Brazil nuts have been harvested from plantations, but production is low and is currently not economically viable.

The fruit takes 14 months to mature after pollination of the flowers. The fruit itself is a large capsule 10–15 cm (4–6 in) in diameter, resembling a coconut endocarp in size and weighing up to 2 kg (4 lb 7 oz). It has a hard, woody shell 8–12 mm (3⁄8–1⁄2 in) thick, which contains eight to 24 wedge-shaped seeds 4–5 cm (1 5⁄8–2 in) long (the "Brazil nuts") packed like the segments of an orange, but not limited to one whorl of segments. Up to three whorls can be stacked onto each other, with the polar ends of the segments of the middle whorl nestling into the upper and lower whorls (see illustration above).

The capsule contains a small hole at one end, which enables large rodents like the agouti to gnaw it open. They then eat some of the seeds inside while burying others for later use; some of these are able to germinate into new Brazil nut trees. Most of the seeds are "planted" by the agoutis in caches during wet season, and the young saplings may have to wait years, in a state of dormancy, for a tree to fall and sunlight to reach it, when it starts growing again. Capuchin monkeys have been reported to open Brazil nuts using a stone as an anvil.

In Brazil, cutting down a Brazil nut tree (typically with the intent of harvesting lumber and Brazil nuts) is illegal, unless with previous authorization from Brazilian Institute of Environment and Renewable Natural Resources.

In 2017, global production of Brazil nuts was 84,000 tonnes, including shells, most of which derive from wild harvests in tropical forests, especially the Amazon. The annual total was consistent since 2009. According to FAO, four countries were producing Brazil nuts in 2017. The largest producer was Brazil, with 39% of the world total, followed by Bolivia, with 30%. The United States was the largest single importer, with 9% of imports.

Since most of the production for international trade is harvested in the wild, the business arrangement has been advanced as a model for generating income from a tropical forest without destroying it. The nuts are most often gathered by migrant workers known as castañeros (in Spanish) or castanheiros (in Portuguese). Logging is a significant threat to the sustainability of the Brazil nut-harvesting industry.

Analysis of tree ages in areas that are harvested shows that moderate and intense gathering takes so many seeds that not enough are left to replace older trees as they die. Sites with light gathering activities had many young trees, while sites with intense gathering practices had nearly none.

In 2003, the European Union imposed strict regulations on the import of Brazilian-harvested Brazil nuts in their shells, as the shells are considered to contain unsafe levels of aflatoxins, a potential cause of liver cancer. 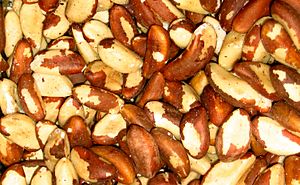 The high selenium content is used as a biomarker in studies of selenium intake and deficiency. Consumption of just one Brazil nut per day over 8 weeks was sufficient to restore selenium blood levels and increase HDL (good) cholesterol in obese women.

The shells of Brazil nuts contain high levels of aflatoxins, which can cause liver damage, including possible cancer, if consumed.

The nuts contain small amounts of radium, a radioactive element, with a kilogram of nuts containing an activity between 40 and 260 becquerels (1 and 7 nanocuries). This is about 1000 times higher than in several other common foods; according to Oak Ridge Associated Universities, not because of elevated levels of radium in the soil, but due to "the very extensive root system of the tree." 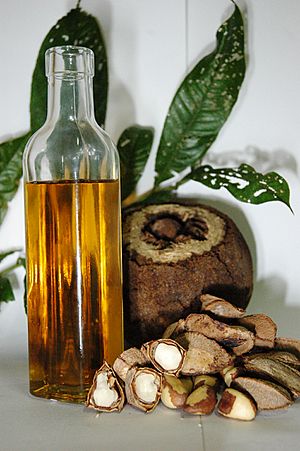 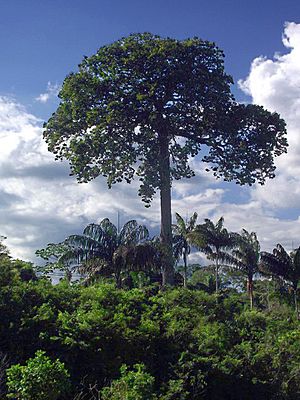 The lumber from Brazil nut trees (not to be confused with Brazilwood) is of excellent quality, having diverse uses from flooring to heavy construction. Logging the trees is prohibited by law in all three producing countries (Brazil, Bolivia, and Peru). Illegal extraction of timber and land clearances present continuing threats. 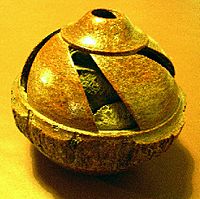 Brazil nut oil is used as a lubricant in clocks, in the manufacturing of paint, and in the cosmetics industry. Engravings in Brazil nut shells are supposed to have been used as decorative jewelry by unnamed indigenous tribes in Bolivia, although no examples exist. Because of its hardness, the Brazil nutshell is often pulverized and used as an abrasive to polish materials such as metals and ceramics, in the same way jeweler's rouge is used.

All content from Kiddle encyclopedia articles (including the article images and facts) can be freely used under Attribution-ShareAlike license, unless stated otherwise. Cite this article:
Brazil nut Facts for Kids. Kiddle Encyclopedia.