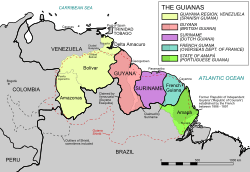 The area labelled "Reclamation Zone" on the map above is actually Guiana, as can be seen from this map

The Orinoco is a main river in northern South America. It is one of the longest rivers in South America, at 2,140 km (1,330 mi). Its drainage basin, sometimes called the Orinoquia, covers 880,000 square kilometres (340,000 sq mi), with 76.3% of it in Venezuela and the rest in Colombia. The Orinoco and its tributaries are the main transport system for eastern and interior Venezuela and the llanos of Colombia.

The Orinoco Basin is also ecologically important. It is the only habitat of the Orinoco crocodile. This is one of the rarest reptiles in the world, with fewer than 250 living in the wild. It is also home to Amazon river dolphins.

The mouth of the Orinoco was recorded by Christopher Columbus on 1 August 1498. Its source, however, was first explored by non-native people in 1951, 453 years later. It was explored by a French and Venezuelan team.

The delta, and tributaries in the eastern llanos such as the Apure and Meta, were explored in the 16th century. They were explored by German expeditions under Ambrosius Ehinger and his successors. Alexander von Humboldt explored the basin in 1800. He reported on the river dolphins, and wrote extensively about the plants and animals he found.

Off the coast of the delta is Trinidad and Tobago, which is separated from the mainland by the Columbus Channel.

Major rivers in the Orinoco Basin

Most of the important rivers in Venezuela are tributaries of the Orinoco. The largest are the Caroní, which joins it at Puerto Ordaz. The river is actually connected to the Amazon River through the Casiquiare canal. This is a distributary of the Orinoco, flowing into the Rio Negro and then the Amazon. This connection forms a natural canal between Orinoco and Amazon. 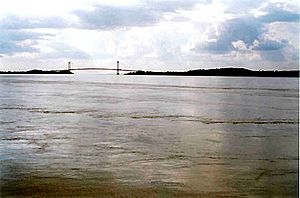 Bridge over the Orinoco at Ciudad Bolívar, Venezuela

Boats can travel on the river for most of its length. Ocean ships can travel as far as Ciudad Bolívar, 435 km (270 mi) upstream. River steamers carry cargo as far as Puerto Ayacucho.

There is a rich iron ore deposit in the Orinoco delta. It was found in 1926, south of the town of San Felix on a mountain named El Florero. Mining there began after World War II. At the start in the early 1950s, about 10,000 tons of soil with ore in it was being mined each day.

There are also tar sands in the Orinoco Belt, which may be a source of future oil production.

All content from Kiddle encyclopedia articles (including the article images and facts) can be freely used under Attribution-ShareAlike license, unless stated otherwise. Cite this article:
Orinoco Facts for Kids. Kiddle Encyclopedia.