The Cairngorms (Scottish Gaelic: Am Monadh Ruadh) is a group of mountains in the eastern part of Highlands of Scotland. It is usually linked with the mountain of the Cairn Gorm. The Cairngorms became part of Scotland's second national park (the Cairngorms National Park) on 1 September 2003. It was part of the tentative list of UNESCO World Heritage Sites.

The Cairgorms, Angus Glens, Monadhliath, and lower areas of Strathspey, make up the Cairngorms National Park.

The Cairngorms is made of high plateau that is about 1000–1200 m above sea level. They have domed summits that that are around 1300 m. high. Many of the summits have tors. These are basically free-standing rock formations that stand on top of the rocky landscape.

The edges of the plateau that have narrow cliffs of granite. It makes it ideal for skiing, rock climbing and ice climbing.

The area is home to birds such as ptarmigan, dotterel, snow bunting, curlew and red grouse, as well as mammals such as mountain hare.

The plateau is also home to Britain's only herd of reindeer. Next to the central massif are the remainders of the Caledonian forest. These forests support many species that are not found anywhere elsewhere in the United Kingdom. These include red squirrels, pine marten, wood ants, Scottish crossbill, capercaillie and crested tit.

There are no glaciers in the area. However, snow can fall at any month of the year. In fact, some snow may be found all summer. It is the most ideal place for ice climbing in Britain.

The mountains are also popular for hill-walking, ski touring and climbing. There are also three alpine ski centres within the area: Cairn Gorm, The Lecht and Glenshee. 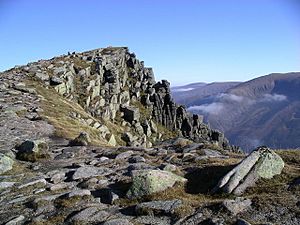 The original Gaelic name for the area is Am Monadh Ruadh, (the red hills). It is different from Am Monadh Liath (the grey hills) which lie to the west of the River Spey:

If you look from Aviemore on a clear evening, the granite screes of Lairig Ghru and Braeriach do glow a warm red in the sun. The name Am Monadh Ruadh still lives among the oldest folk of Strath Spey, but long ago, outsiders had replaced it with 'the Cairngorms', on maps and in guide books.

The English language name for the area is Cairngorms. It came from Cairn Gorm. It is the prominent in the view of the mountains from Speyside. The earliest time when the name appeared in the history is from a Colonel T. Thornton who visited the area in about 1786:

The use of the term "Cairngorms" as applied to the group must have become well established early in the nineteenth century, for we find it in Col Thornton's Sporting Tour (1804), where there is a reference to "Aurora peeping over the immense Cairngorms."

Cairn Gorm means Blue Cairn. Although the Gaelic gorm can also be used as an adjective and verb. It means green or greening, and is often seen in connection with growing grass.

The Cairngorms from Càrn Liath to the south

All content from Kiddle encyclopedia articles (including the article images and facts) can be freely used under Attribution-ShareAlike license, unless stated otherwise. Cite this article:
Cairngorms Facts for Kids. Kiddle Encyclopedia.