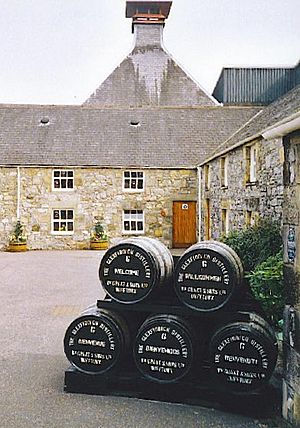 The Glenfiddich Distillery, in Dufftown

Strathspey (Scottish Gaelic, Srath Spè) is the area around the strath of the River Spey, Scotland, in both the Moray council area and the Badenoch and Strathspey committee area of Highland.

The term Strathspey usually refers to the upper part of the strath from the source of the Spey down to the capital, Grantown-on-Spey, whereas the anglicised form, Speyside, refers to the area from Grantown-on-Spey to the mouth of the river at Spey Bay. Recently there has been some controversy over attempts to anglicise the name into Spey Valley. The tourist area from the south starts at Dalwhinnie and continues North along the A9 towards Newtonmore, Kingussie, Aviemore and on towards Grantown-on-Spey. The Canadian merchant Robert Simpson, founder of Simpson's department store, was born there in 1834. Speyside is one of the main centres of the Scotch whisky industry, with a high concentration of single malt distilleries in the region, including the Glenfiddich and Balvenie distilleries.

All content from Kiddle encyclopedia articles (including the article images and facts) can be freely used under Attribution-ShareAlike license, unless stated otherwise. Cite this article:
Strathspey, Scotland Facts for Kids. Kiddle Encyclopedia.