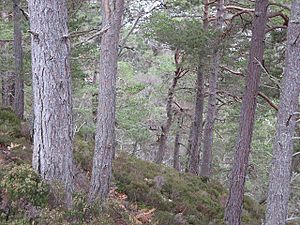 Caledonian Forest above the Allt Ruadh

The Caledonian Forest is a type of woodland that once covered vast areas of Scotland. Today, parts of the original forest survive, covering 180 square kilometres (44,000 acres) in 84 places. The forests are home to a wide variety of wildlife, much of which is not found elsewhere in the British Isles.

The Caledonian forests were formed at the end of the last ice age. Trees began to recolonise what is now the British Isles over a land bridge which is now beneath the English Channel. Forests of this type were found all over what is now the island of Great Britain for a short period. Then the climate began to warm and the pine wood retreated north into the Scottish Highlands. 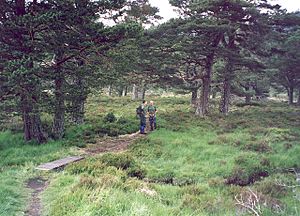 Caledonian pinewoods near Loch an Eilein

The native pinewoods which formed this westernmost outpost of the boreal forest of Europe are estimated to have covered 15,000 km2 (3,700,000 acres) as a vast wilderness of pine, birch, rowan, aspen, juniper, oak and a few other species. On the west coast, oak and birch predominated in a temperate rainforest ecosystem rich in ferns, mosses and lichens.

The forest takes its name from the Romans, who called Scotland Caledonia, from the early Celtic word '*caleto-' meaning 'hard, strong'. The name was used by a local tribe or tribal confederation of native Picts or Britons called the Caledonii.

Today less than 1% of the original native pinewood forest survives, in isolated remnants. 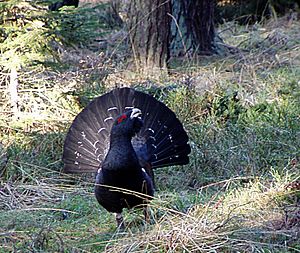 Capercaillie - a species which depends on the Caledonian Forest

Breeding bird species in Caledonian pine forests which breed nowhere else in the British Isles: 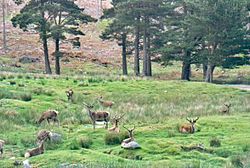 All content from Kiddle encyclopedia articles (including the article images and facts) can be freely used under Attribution-ShareAlike license, unless stated otherwise. Cite this article:
Caledonian Forest Facts for Kids. Kiddle Encyclopedia.