A Rowan is a type of fruit-bearing plant in the family Rosaceae. They grow in the cooler areas of Europe and Asia. The fruit is a 4-8 mm diameter ball. It is bright orange or red in most species, but pink, yellow or white in some Asian species. The fruit are soft and juicy.

The best known species is European Rowan Sorbus aucuparia, a small tree typically 4-12 m tall growing in a variety of habitats throughout northern Europe and in mountains in southern Europe and southwest Asia. Its berries are a favourite food for many birds and are a traditional wild-collected food in Britain and Scandinavia.

Besides Sorbus aucuparia, several other similar species from Asia in particular are widely cultivated as ornamental trees.

Etymology, and other names

The name "rowan" is derived from the Old Norse name for the tree, raun or rogn. Linguists believe that the Norse name is ultimately derived from a proto-Germanic word *raudnian meaning "getting red" and which referred to the red foliage and red berries in the autumn. Rowan is one of the most familiar wild trees in the British Isles, and has acquired numerous English folk names. The following are recorded folk names for the rowan: Delight of the eye (Luisliu), Mountain ash, Quickbane, Quickbeam, Quicken (tree), Quickenbeam, Ran tree, Roan tree, Roden-quicken, Roden-quicken-royan, Round wood, Royne tree, Rune tree, Sorb apple, Thor's helper, Whispering tree, Whitty, Wicken-tree, Wiggin, Wiggy, Wiky, Witch wood, Witchbane, Witchen, Witchen tree. Many of these can be easily linked to the mythology and folklore surrounding the tree, as discussed below. In Gaelic, it is Rudha-an (red one).

One particularly confusing name for the rowan, still used in North America, is "mountain ash", which implies incorrectly that it is a species of ash (Fraxinus). The name arises from the superficial similarity in leaf shape of the two trees; in fact, the rowan does not belong to the ash family, but is closely related to the apples and hawthorns in the rose family. 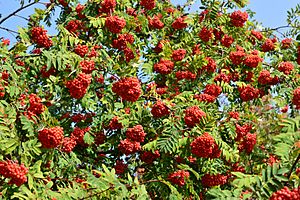 Rowan berries have many different uses.

Rowans are excellent small ornamental trees for parks, gardens and wildlife areas. Several of the Chinese species, such as White-fruited rowan (S. glabrescens) are popular for their unusual berry colour, and Sargent's rowan (S. sargentiana) for its exceptionally large clusters of fruit. They are very attractive to fruit-eating birds, which is reflected in the old name "bird catcher". The wood is dense and used for carving and turning and for tool handles and walking sticks.

The European rowan (S. aucuparia) has a long tradition in European mythology and folklore. It was thought to be a magical tree and protection against evil beings.

The density of the rowan wood makes it very usable for walking sticks and magician's staffs that additionally carry protective qualities for safe night journeys. This is why druid staffs, for example, have traditionally been made out of rowan wood. The magic power that is ascribed to rowan extends beyond simple protection, for it is said that rowan wood will increase one's psychic powers, and its branches were often used in magical wands.

Further, rowan was carried on vessels to avoid storms, kept in houses to guard against lightning, and even planted on graves to keep the deceased from haunting. It is also used to protect one from witches. Often birds' droppings contain rowan seeds, and such droppings if they land in a fork or hole where old leaves have accumulated in a larger tree, such as an oak or a maple, may result in a rowan growing as an epiphyte on the larger tree. Such a rowan is called a "flying rowan" and is especially potent against witches and their magic, and as a counter-charm against sorcery.

Fresh rowan berry juice is usable as a laxative, gargle for sore throats, inflamed tonsils, hoarseness, and as a source of vitamins A and C. Rowan berry jam will remedy diarrhea.

Rowan berries are usually too astringent to be palatable when raw, but can be made into an excellent, slightly bitter, jelly which in England is traditionally eaten as an accompaniment to game. The berries can also be a substitute for coffee beans, and have many uses in alcoholic beverages: to flavour liqueurs and cordials, to produce country wine, and to flavour ale. Rowan cultivars with superior fruit for human food use are available but not common; mostly the fruits are gathered from wild trees growing on public lands.

All content from Kiddle encyclopedia articles (including the article images and facts) can be freely used under Attribution-ShareAlike license, unless stated otherwise. Cite this article:
Rowan Facts for Kids. Kiddle Encyclopedia.