The horned grebe or Slavonian grebe (Podiceps azurites) - Podiceps: Latin for podicis (rump) and pedis (foot), referring to the placement of the legs on its body; auritus: Latin for eared - is a member of the grebe family of water birds. It inhabits Eurasia and North America.

Horned grebe can be easily recognized by its red-and-black alternate (breeding) plumage, its black-and-white basic (non-breeding) plumage and its characteristic "horns". It is 31–38 cm long, has a wingspan 55–74 cm wide and weighs 300–570 g. It has a moderately long neck, flat forehead and a rear crown of black feathers. Its beak is straight and pointy with a white tip. Both subspecies are physically similar, with P. a. auritius (Eurasia) appearing darker than P. a. cornutus (North America), which has light grey feathers on its back, which are inconspicuous or absent in P. a. auritius. The horned grebe is often confused with the black-necked grebe, which is similar in size and colouring but differentiates by a steeper forehead, a more slender bill and a fluffier rump.

The alternate (breeding) plumage of the horned grebe has bright erectable "horns", black fan-shaped cheek feathers and an overall red-and-black colour. The neck, flanks, lores and upper-chest are chestnut brown, while the crown and back are black. The belly is a dull white. Males are slightly larger and brighter than females but are generally indistinguishable.

The basic (non-breeding) plumage is overall black and white. The neck, chest and cheeks are white, while the back and crown are a dull black-grey. The border between the crown and the cheeks extend in a straight line behind the eyes. The basic plumage does not have the "horns". 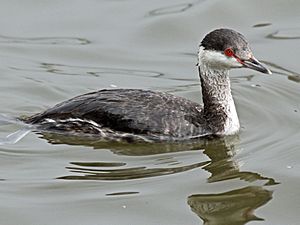 Juveniles appear similar to a non-breeding adult except they are a slightly duller shade of white and their back is tinged with brown. The line separating the cheeks and crown is less distinct and their beak is paler. The chicks are fluffy, with a dull grey back, a white belly and interesting black-and-white facial stripping.

All content from Kiddle encyclopedia articles (including the article images and facts) can be freely used under Attribution-ShareAlike license, unless stated otherwise. Cite this article:
Horned grebe Facts for Kids. Kiddle Encyclopedia.