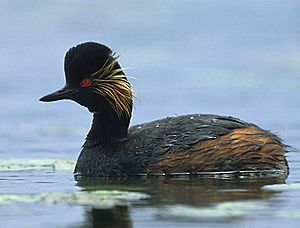 The black-necked grebe (Podiceps nigricollis), known in North America as the eared grebe, is a member of the grebe family (biology) of water birds. It occurs on every continent except Australia and Antarctica. 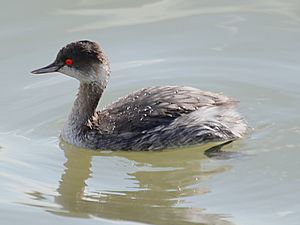 The black-necked grebe usually measures between 28 and 34 centimetres (11 and 13 in) in length and weighs 265 to 450 grams (9.3 to 15.9 oz). The nominate subspecies in breeding plumage has the head, neck, breast, and upperparts coloured black to blackish brown, with the exception of the ochre-coloured fan of feathers extending behind the eye over the eye-coverts and sides of the nape. This eye is mostly red, with a narrow and paler yellow ring on the inner parts of the eye and an orange-yellow to pinkish-red orbital ring. The thin, upturned bill, on the other hand, is black, and is connected to the eye by a blackish line starting at the gape. Sometimes, the foreneck can be found to be mostly tinged brown. The upperwing is blackish to drab brown in colour and has a white patch formed by the secondaries and part of the inner primaries. The flanks are coloured tawny rufous to maroon-chestnut and have the occasional blackish fleck. The underwing and abdomen is white, with an exception to the former being the dark tertials and the mostly pale grey-brown outer primaries. The legs are a dark greenish grey. The sexes are similar.

In non-breeding plumage, the nominate has greyish-black upperparts, cap, nape, and hindneck, with the colour on the upper portion of the latter being contained in a vertical stripe. The dark colour of the cap reaches below the eye and can be seen, diffused, to the ear-coverts. Behind the ear-coverts on the sides of the neck, there are white ovals. The rest of the neck is grey to brownish-grey in colour and has white that varies in amount. The breast is white, and the abdomen is whitish. The flanks are coloured in a mix of blackish-grey with white flecks. The colour of the bill differs from the colour in breeding plumage, with the colour of the bill of a non-breeding black-necked grebe being significantly more grey.

The juvenile black-necked grebe is similar to the non-breeding adult. There are differences, although, including the fact that the dark areas are usually more brownish in the juvenile, with less black. The lores are often tinged pale grey, with whitish marks behind the eye. On the sides of the head and upper neck, there is a buffy or tawny tinge. The chick is downy and has a blackish-grey head with stripes and spots that are white or pale buff-grey. The throat and foreneck are largely pale. The upperparts are mostly dark grey in colour, and the abdomen is white.

The subspecies californicus usually has a longer bill compared to the nominate, and has brown-grey inner primaries during the breeding season. When not breeding, the nominate has diffuse and pale lores less often than Podiceps nigricollis californicus. The other subspecies, P. n. gurneyi, is slightly smaller than the other subspecies, and has a greyer head and upperparts. The adult of this subspecies also has, on its lesser wing-coverts, a rufous-brown tinge. It also lacks a non-breeding plumage, in addition with the tufts on the side of its head being paler.

When breeding, the black-necked grebe gives a quiet "ooeek" that ascends in pitch from an already high pitch. This call is also used as a territorial call, in addition to a low and fast trill, which itself is also used during courtship. Another call is a short "puuii" or "wit". This grebe is silent when it is not breeding and when it is feeding or resting.

This species breeds in vegetated areas of freshwater lakes across Europe, Asia, Africa, northern South America and the southwest and western United States. The bird migrates in winter, mostly to the Pacific Coast where it ranges south to El Salvador on a regular basis; vagrants may occur as far as Costa Rica.

This grebe is highly gregarious, usually forming large colonies when breeding and large flocks when not.

The black-necked grebe forages mainly by diving from the water, with dives usually lasting less than 30 seconds. These dives are usually shorter in time when in more shallow water. In between dives, this grebe rests for an average of 15 seconds. It also forges by gleaning foliage, plucking objects off of the surface of water, having its head submerged while swimming, and sometimes capturing flying insects.

This grebe eats mostly insects (both adult and larval insects) as well as crustaceans, molluscs, tadpoles, and small frogs and fish. When moulting at lakes with high salinity, although, this bird feeds mostly on brine shrimp. This has the effect of the behaviour of black-necked grebes changing in response to the availability of brine shrimp; bodies of water with more shrimp will experience more grebes, and grebes will increase the time spent foraging when the amount of shrimp and the water temperature decreases. 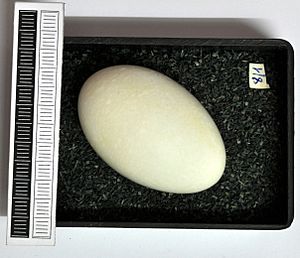 This species builds its floating nest in the usually shallow water of open lakes. The nest itself is anchored to the lake by plants. It is built by both the male and female and made out of plant matter. Most of it is submerged, with the bottom of the shallow cup usually being level with the water. Above the cup, there is a flat disc. This grebe nests both in colonies and by itself. When it does not nest by itself, it will often nest in mixed-species colonies. Whether it nests in colonies or not has an effect on the dimensions of the nest. When the bird is not in a colony, the nest has a diameter of 28 centimetres (11 in) (although this can vary, with nests ranging from about 20 centimetres (7.9 in) to over 30 centimetres (12 in)) on average while nests in colonies have an average diameter of about 25.5 centimetres (10.0 in). This grebe can commonly be found to nest near black-headed gulls, a common member in the aforementioned mixed-species colonies. It is suggested that sometimes, some pairs of this grebe will steward over multiple nests when in colonies.

Pair formation in the black-necked grebe starts during pauses in the migration to the breeding grounds. It continues through the breeding season, and sometimes occurs on the wintering grounds. Courtship occurs when it arrives at the breeding lake. The displays are preformed in the middle of the lake. There is no territory involved in courting; individuals used the whole area of the lake. When advertising for a mate, a black-necked grebe will approach other black-necked grebes with its body fluffed out and its neck erect. It will also close its beak perform a call, poo-eee-chk, with the last note only able to be heard when close to the bird. Courtship generally stops at the start of nesting.

The black-necked grebe is socially monogamous. It practices conspecific brood parasitism (CBP), where the female lays eggs in the nest of another member of the species. The level of CBP is relatively high in this species, with just under 40% of nests being parasitized on average.

This grebe lays one, but sometimes two, clutch of three to four chalky greenish or bluish eggs. Nests that have been parasitized, although, will have two more eggs on average, even though the amount that the host lays is about the same no matter if it has been parasitized or not. The eggs, although they are not initially spotted, do get stained by the plant matter that the nest is built out of. The eggs measure 45 by 30 millimetres (1.8 by 1.2 in) on average and are incubated by both parents for about 21 days. The laying date of the eggs is somewhat synchronized, with birds in small colonies having the laying dates spread out by just a few days, compared to large colonies, where the laying date is spread out over more than 10 days.

After the chicks hatch, the birds will desert their nest. Although the young can swim and dive during this time, they rarely do, instead staying on the parents' backs until four days after hatching. After about 10 days, the parents split the chicks up, with each parent taking care of about half of the brood. After this split, the chicks are independent in about 10 days, and fledge in about three weeks.

When disturbed while incubating, this bird usually (just under 50% of the time) partly covers its eggs with nest material when the disruption is not sudden, although a bird with an incomplete clutch usually does not attempt to cover the eggs. When the disruption is sudden, on the other hand, the black-necked grebe usually (just under 50% of the time) does not cover its eggs. This compares to other species of grebes, which cover up their eggs when leaving the nest.

When it is done breeding, the black-necked grebe usually partakes in a moult migration, where it migrates to bodies of water to moult. Some birds, although, moult when on the breeding grounds, but most do not moult until the end of the moult migration. This migration is dangerous, with hundreds and sometimes thousands of birds being killed by snowstorms when traveling to places such as Mono Lake.

When it finishes its moult migration, this bird moults between August and September, which makes it unable to fly. This moult is preceded by an increase in weight. During the moult, the breast muscles atrophy. When the moult is completed, this grebe continues to gain weight, often more than doubling its original weight.

This grebe is one of the most inefficient fliers among birds. Generally, it avoids flying at all costs and reserves long-distance flight exclusively for migration. This is combined with the fact that this bird is flightless for two months of the year during its moult. However, when migrating, it travels as much as 6,000 km (3,700 mi) to reach prosperous areas that are exploited by few other species. In flight, the shape of this grebe is like a loon. The black-necked grebe flies with a straight neck, legs trailing, and wings beating often.

When diving, this bird pulls its head back and then arches it forward into the water, with the body following and springing a bit. The legs only move when they are underwater. When swimming on the surface of the water, the body of this grebe is relatively high, although none of the underparts are seen. The neck is held straight up in a relaxed manner, with the bill being held forward and parallel to the water. Each of the feet perform strong alternating strokes.

All content from Kiddle encyclopedia articles (including the article images and facts) can be freely used under Attribution-ShareAlike license, unless stated otherwise. Cite this article:
Black-necked grebe Facts for Kids. Kiddle Encyclopedia.