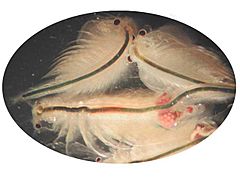 Brine shrimp are small shrimp that live in salt water. Brine shrimp are Artemia, a genus of aquatic crustacea which has changed little (externally) since the Triassic period. They can often be found in saltwater ponds and marshes, and cannot live very long in fresh water. Artemia avoid most types of predators, such as fish, because they live in waters of very high salinity: (25 parts per thousand). The optimum for Artemia is 100 to 150 parts per thousand. The shrimp grow to be about one centimeter long. Females tend to be larger than males.

Brine shrimp circulatory and respiratory systems work together to remove extra salt from their body and distribute oxygen. They breathe through gills on their feet. The oxygen taken in is carried through the bloodstream. The heart pumps the blood around the body. Brine shrimp have a protein called hemoglobin in their blood. This helps the oxygen to be more efficiently transported to cells around the body. They need hemoglobin because oxygen levels can be very low in salty water. Then, the gills pump the excess salt, water, and carbon dioxide out of the body. Additional salt is pumped out through exocrine glands.

The brine shrimp's body has a head, thorax, and abdomen. A hard exoskeleton covers the entire body. Inside this exoskeleton, which is made of chitin, is where the brine shrimp’s muscles are located. Their muscles are attached internally. They move by beating their tails and by the continuous movement of the legs along their body.

Males differ from females by having the second antennae enlarged, and modified into clasping organs used in mating.

All content from Kiddle encyclopedia articles (including the article images and facts) can be freely used under Attribution-ShareAlike license, unless stated otherwise. Cite this article:
Brine shrimp Facts for Kids. Kiddle Encyclopedia.