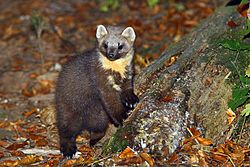 Martens are small predators which also eat eat berries, birds' eggs, nuts, and honey. They move on the ground and in trees. Their natural habitat is in pine forests. Their main enemies are said to be the gamekeepers on highland estates. In the United Kingdom, pine martens and their dens have protection under the Wildlife and Countryside Act 1981 and the Environmental Protection Act 1990.

All content from Kiddle encyclopedia articles (including the article images and facts) can be freely used under Attribution-ShareAlike license, unless stated otherwise. Cite this article:
Pine marten Facts for Kids. Kiddle Encyclopedia.