Newtown (Welsh: Y Drenewydd) is the largest town in the county of Powys, Wales. It had a population of 12,783 in 2001, falling to 11,357 at the 2011 census. Lying on the River Severn, within the historic boundaries of Montgomeryshire, the town is best known as the birthplace of Robert Owen in 1771 His former house stood on what is now the site of the HSBC Bank. The Robert Owen Museum is across the road, occupying the ground floor of the council offices. Newtown is also the home of Theatr Hafren and of Oriel Davies, a major public gallery, which displays national and international contemporary art and craft.

Newtown was founded at the end of the 13th century when Edward I of England commissioned Roger de Montgomerie to construct a centre for the hamlet of Llanfair-yng-Nghedewain. It was situated near the ford on the River Severn, below the Long Bridge and around the church of St Mary in Bettws Cedewain. This gave Newtown its original Welsh name. The foundation is intimately connected to the fate of Llywelyn ap Gruffudd, Prince of Wales, whose new administrative centre at Dolforwyn Castle near Abermule so alarmed Edward I that it was besieged. He seized Llywelyn's lands and granted them to the Mortimers. They transferred the administration of the cantref of Cedewain and the commote of Ceri from Dolforwyn Castle to the new settlement at Newtown. 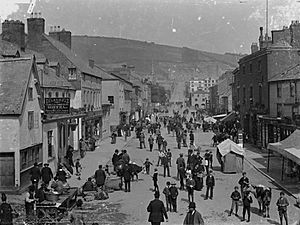 The town grew in the 18th and 19th centuries around the textile and flannel industry, stimulated by the completion of the Montgomeryshire Canal. In 1838, the town saw Wales' first Chartist demonstration.

The Cambrian Mills, which opened in 1856, were the first steam-driven mills in Newtown. The mill complex was beside the canal terminus on the east bank of the Severn. They expanded to become the largest Welsh woollen mills. However, by the end of the 19th century the mills in Newtown were no longer competitive with those in the north of England. There was a disastrous fire in 1910, and another in 1912, after which the Cambrian Mill was not rebuilt. After the Cambrian Mills closed, Newtown was no longer an important woollen industrial centre and many of the workers moved elsewhere.

The town was designated as a "new town" in 1967. It saw a large population growth as companies and people settled, changing the rural market town character. Newtown hosted the National Eisteddfod in 1965.

Newtown is about 8 miles (13 km) from the Wales-England border, in the narrow valley of the river Severn which restricts development north and south of the town. Newtown is surrounded by small villages often referenced as the Newtown area. The Newtown post town area, including surrounding villages, has a population approaching 16,000. These villages include Aberhafesp, Adfa, Bettws Cedewain, Bwlch-y-ffridd, Cefn-gwyn, Dolfor, Glanmule, Kerry, Llanllwchaiarn, Llanwyddelan, Mochdre, New Mills, Pentre, Rhydlydan, Sarn and Tregynon. 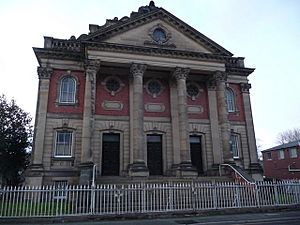 Bear Lanes, the town's main shopping centre, has a Tudor-style entrance. The building was once a hotel, The Bear, which contributes to the centre's appearance today.

A statue of Robert Owen was erected in 1956 in a small park off Shortbridge Street and Gas Street. A replica statue was later built in Manchester, England.

The Free Library building, designed by the architect Frank Shayler of Shrewsbury, was built in 1902.

The Baptist Chapel, dating from 1881, is a prime example of nonconformist architecture of the period.

Newtown is twinned with:

Newtown's station, on the Shrewsbury-Aberystwyth line, is currently served by Arriva Trains Wales. Most of the local bus services, both within the town and serving nearby locations, are operated by privately owned, local companies. Newtown has one National Express bus per day in each direction: Aberystwyth to London and back. Two major roads cross in Newtown town centre: the A483 from Swansea to Chester and the A489 from Machynlleth to Craven Arms.

The Montgomery Canal originally terminated in Newtown. Following its closure in 1944, the section in Newtown was sold and subsequently built on. Canal Road and Lower Canal Road in Newtown are named after it.

All content from Kiddle encyclopedia articles (including the article images and facts) can be freely used under Attribution-ShareAlike license, unless stated otherwise. Cite this article:
Newtown, Powys Facts for Kids. Kiddle Encyclopedia.