Craven Arms is a small town and civil parish in Shropshire, England, on the A49 road and the Welsh Marches railway line, which link it north and south to the larger towns of Shrewsbury and Ludlow respectively. The Heart of Wales railway line joins the Welsh Marches line at Craven Arms and the town is served by Craven Arms railway station. The town is enclosed to the north by the Shropshire Hills Area of Outstanding Natural Beauty, and to the south is the fortified manor house of Stokesay Castle.

Craven Arms is a market town for the surrounding rural area, with a number of shops, banks, estate agents, a supermarket, an abattoir and many commercial/light industrial businesses. It is also a visitor destination, being home or nearby to a number of attractions, and being central for visitors to the area of outstanding natural beauty. It describes itself as the "Gateway to the Marches".

Craven Arms is a relatively new town (for Shropshire), being only a small village "Newton" on a map of 1695. The settlement grew when the railways came during the mid to late 19th century, making it a railway town. Newton or Newtown is still the name for the southeastern part of the present day town, while the northern part is called Newington or New Inn (another small village which existed prior to the town). The town takes its name from the Craven Arms Hotel, situated on the junction of the A49 and B4368 roads, which in turn is named after the Lords Craven (who owned nearby Stokesay Castle).

The civil parish of Craven Arms was formed from the merging of two older parishes — Stokesay and Halford. These two older entities continued as parish wards, however a review of the governance of the parish in 2012 concluded that these two wards would be abolished from May 2013. Small parts of the settlement overlap into neighbouring Wistanstow and Sibdon Carwood parishes.

Nearby towns are Bishop's Castle, Clun, Church Stretton and Ludlow, of which the last is the most substantial.

Wenlock Edge is to the northeast of the town and runs in a northeasterly direction, towards Much Wenlock. 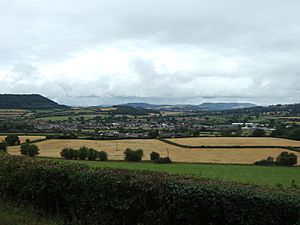 The entire town as viewed from the east.

There are three main visitor attractions in the Craven Arms civil parish. In the town there is the Shropshire Hills Discovery Centre, a centre featuring exhibits about the county's geography; and Stella Mitchell's Land of Lost Content Museum, a collection of 20th century memorabilia. Stokesay Castle is a fortified manor house located within the parish, just south of the town.

The town has recently gone through a phase of expansion and this looks set to continue with the (now abolished) South Shropshire District Council stating that they wished to see the town become the district's second main market town (after Ludlow) by 2026. Much of the recent housing development is on the west side of the town, whilst commercial development is taking place more on the northern end. Development potential towards the east is restricted by the floodplain of the River Onny, whilst to the south lies the historically important Stokesay Castle.

The town centre itself has seen some notable developments in recent years, with new commercial buildings built on Dale Street by the A49 road. Additionally, to the immediate south of the town centre is the new Secret Hills Discovery Centre and some new housing.

All content from Kiddle encyclopedia articles (including the article images and facts) can be freely used under Attribution-ShareAlike license, unless stated otherwise. Cite this article:
Craven Arms Facts for Kids. Kiddle Encyclopedia.