Much Wenlock facts for kids

Much Wenlock is a small and picturesque town and parish in Shropshire, England, situated on the A458 road between Shrewsbury and Bridgnorth. Nearby, to the northeast, is the Ironbridge Gorge, and the new town of Telford.

Much Wenlock was historically the chief town of the ancient borough of Wenlock. The "Much" was added to the name to distinguish it from the nearby Little Wenlock, and signifies that it is the larger of the two settlements. Notable historic attractions in the town are Wenlock Priory and the Guildhall. The name Wenlock probably comes from the Celtic name Wininicas, meaning "white area" (in reference to the limestone of Wenlock Edge), plus the Old English loca, meaning "enclosed place". The town was recorded in the Domesday Book as Wenloch. The population of the town's parish, according to the 2001 census, was 2,605, increasing to 2,877 at the 2011 Census.

The Wenlock Olympian Games established by Dr William Penny Brookes in 1850 are centred in the town. Dr Brookes is credited as a founding father of the modern Olympic Games, and one of the Olympic mascots for London 2012 was named Wenlock after the town.

Richard Fletcher mentions Much Wenlock as one of the possible locations where a Sub-Roman British Christian community may have survived the Anglo-Saxon occupation and eventually integrated with the conquerors and influenced their culture.

The town of Wenlock is known to have grown up around an abbey or monastery founded around 680 by Merewalh, a son of King Penda of Mercia, with the small town within its parish boundaries. King Penda installed his daughter Milburga as abbess in 687. Milburga of Wenlock was credited with many miraculous works. The abbey flourished until around 874 when it is thought that a Danish Viking attack occurred.

In the 11th century another religious house was built on the same site by Leofric, Earl of Mercia and Countess Godiva his wife. In the 12th century this was replaced by a Cluniac priory, established by Roger de Montgomerie after the Norman Conquest, the ruins of which can still be seen and which is now in the hands of English Heritage. It prospered until the Dissolution of the Monasteries in 1539. Other architectural attractions include the 16th century Guildhall, many other historic buildings in the Early English style and an annual well dressing at St Milburga's Well on Barrow Street.

11-year-old Alice Glaston from Little Wenlock was hanged together with two men in Much Wenlock on 13 April 1546, for an unknown crime. She is the youngest known girl legally executed in Great Britain.

In the 19th century the town and much of the surrounding land came into the possession of James Milnes Gaskell, from his wife's family the Williams-Wynns. James was MP for Wenlock for many years. His son Charles Milnes Gaskell restored the Priory lodging as a home with his wife Lady Catherine, daughter of the Earl of Portsmouth. There they entertained many famous people of the day, writers, politicians, artists and explorers, among them Thomas Hardy, Henry Adams, Henry James, Thomas Woolner, Henry Morton Stanley, Isabella Bird and Phillip Webb.

The Domesday Book of 1086 records the manor as 'Wenloch' and forming part of the hundred of Patton. It was already at this time a fairly large settlement, with 73 households. The abbey is also recorded in the Book, separately. The borough of Wenlock was incorporated under the "Bailiff, Burgesses and Commonalty" by Edward IV in 1468 at the request of Sir John Wenlock, and "in consideration of the laudable services which the men of the town performed in assisting the king to gain possession of the crown," and the charter was confirmed in 1547 by Henry VIII and in 1631 by Charles I.

Much Wenlock has become known as the birthplace of Wenlock Olympian Games set up by Dr William Penny Brookes and his Wenlock Olympian Society (WOS) in 1850. In 1861 he was also instrumental in setting up the Shropshire Games and later in 1866, the National Olympian Games. Dr Brookes is credited as a founding father of the Modern Olympic Games. In 1890 it was the turn of the Raven Hotel to be the venue for the annual post Wenlock Olympian Games' dinner, and Baron Pierre de Coubertin was the guest of honour. Copies of some of the WOS's archive images are on display in the hotel, including letters from Coubertin to Brookes. The Wenlock Olympian Games, a nine-day event staged on eight sites across Shropshire, are still held annually during July, and are still organised by WOS. Much Wenlock's secondary school is named after Dr Brookes.

The Olympic mascot for London 2012 was named Wenlock to honour Dr Brookes, WOS and Much Wenlock. On 30 May 2012, the Olympic flame of the London 2012 Summer Games, was carried through Much Wenlock to acknowledge the founding footsteps of Dr Brookes. WOS Vice-President, John Simpson, carried an Olympic torch from the town into the William Brookes School.

A borough of Wenlock existed until 1966 which, at its height, was – by area – the largest borough in England outside London and encompassed several of the towns that now constitute Telford. The borough had unusual boundaries, covering Much Wenlock itself, but also Little Wenlock, Broseley and Ironbridge, a total area of 71 square miles (180 km2). In 1966 the core Wenlock parts became part of the Bridgnorth Rural District, with other parts also going to Dawley Urban District and to Wellington Rural District.

Much Wenlock was the location for the third episode of the first series of the archaeology television programme Time Team in 1994. 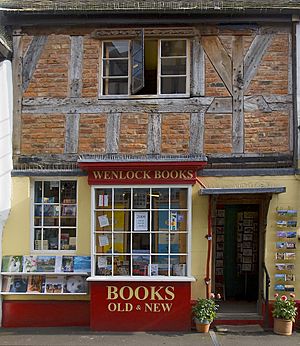 Bookshop in Much Wenlock

In July 2011, the documentary 'Tony Robinson's Olympics' was filmed during the Wenlock Olympian Games and also in and around Much Wenlock

Much Wenlock used to be served by trains between Wellington and Craven Arms. The station became a terminus when through running southwards to Craven Arms ceased in 1951. The branch closed in 1962, just before Dr Beeching published his report.

All content from Kiddle encyclopedia articles (including the article images and facts) can be freely used under Attribution-ShareAlike license, unless stated otherwise. Cite this article:
Much Wenlock Facts for Kids. Kiddle Encyclopedia.