John Marwood Cleese ( born 27 October 1939) is an English actor, voice actor, comedian, screenwriter, and producer. He achieved success at the Edinburgh Festival Fringe and as a scriptwriter and performer on The Frost Report.

In the late 1960s, he co-founded Monty Python, the comedy troupe responsible for the sketch show Monty Python's Flying Circus. Along with his Python co-stars Terry Gilliam, Eric Idle, Terry Jones, Michael Palin and Graham Chapman, Cleese starred in four Monty Python films: And Now for Something Completely Different, Monty Python and the Holy Grail, Life of Brian and The Meaning of Life.

In the mid-1970s, Cleese and his first wife, Connie Booth, co-wrote the sitcom Fawlty Towers, and starred in it, alongside Prunella Scales and Andrew Sachs. The series resulted in Cleese receiving the 1980 BAFTA for Best Entertainment Performance, and additionally it topped the British Film Institute's list of the 100 Greatest British Television Programmes.

In the 80's and 90's, Cleese co-starred with Kevin Kline, Jamie Lee Curtis, and former Python colleague Michael Palin in A Fish Called Wanda and Fierce Creatures, both of which he also wrote. He also starred in Clockwise and has appeared in many other films, including two James Bond films (as R and Q), two Harry Potter films (as Nearly Headless Nick), and three Shrek films.

With Yes Minister writer Antony Jay, he co-founded Video Arts, a production company making entertaining training films. In 1976, Cleese co-founded The Secret Policeman's Ball benefit shows to raise funds for the human rights organisation Amnesty International. In 1996, he was offered a knighthood, and later a life peerage, both of which he declined.

Cleese was born in Weston-super-Mare, Somerset, the only child of Reginald Francis Cleese (1893–1972), an insurance salesman (whose father was an insurance clerk), and his wife Muriel Evelyn (née Cross, 1899–2000, the daughter of an auctioneer). His family's surname was originally Cheese, but his father had thought it was embarrassing and changed it when he enlisted in the Army during the First World War.

When he was 13, he was awarded an exhibition at Clifton College, an English public school in Bristol. He was already more than 6 feet (1.83 m) tall by then.

Cleese played cricket in the First XI and did well academically, passing 8 O-Levels and 3 A-Levels in mathematics, physics, and chemistry.

He then took up a place he had won at Downing College, Cambridge, to read Law. He also joined the Cambridge Footlights. He recalled that he went to the Cambridge Guildhall, where each university society had a stall, and went up to the Footlights stall where he was asked if he could sing or dance. He replied "no" as he was not allowed to sing at his school because he was so bad, and if there was anything worse than his singing, it was his dancing. He was then asked "Well, what do you do?" to which he replied, "I make people laugh."

At the Footlights theatrical club, he spent a lot of time with Tim Brooke-Taylor and Bill Oddie and met his future writing partner Graham Chapman. 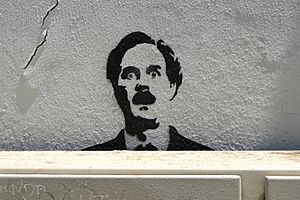 Also in 1965, Cleese and Chapman began writing on The Frost Report. The writing staff chosen for The Frost Report consisted of a number of writers and performers who would go on to make names for themselves in comedy. They included co-performers from I'm Sorry, I'll Read That Again and future Goodies Bill Oddie and Tim Brooke-Taylor, and also Frank Muir, Barry Cryer, Marty Feldman, Ronnie Barker, Ronnie Corbett, Dick Vosburgh and future Python members Eric Idle, Terry Jones, and Michael Palin.

Monty Python's Flying Circus ran for four seasons from October 1969 to December 1974 on BBC Television, though Cleese quit the show after the third.

In December 1977, Cleese appeared as a guest star on The Muppet Show. Cleese was a fan of the show and co-wrote much of the episode. Cleese also made a cameo appearance in their 1981 film The Great Muppet Caper and won the TV Times award for Funniest Man on TV – 1978–79. In 1979, he starred in a TV special, "To Norway - Home of Giants," produced by Johnny Bergh. 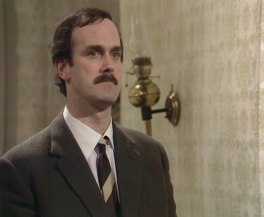 Cleese achieved greater prominence in the United Kingdom as the neurotic hotel manager Basil Fawlty in Fawlty Towers, which he co-wrote with his wife Connie Booth.

The series won three BAFTA awards when produced and in 2000, it topped the British Film Institute's list of the 100 Greatest British Television Programmes. The series also featured Prunella Scales as Basil's acerbic wife Sybil, Andrew Sachs as the much abused Spanish waiter Manuel (from Barcelona), and Booth as waitress Polly.

The first series was screened from 19 September 1975 on BBC 2, initially to poor reviews, but gained momentum when repeated on BBC 1 the following year. Despite this, a second series did not air until 1979, by which time Cleese's marriage to Booth had ended, but they revived their collaboration for the second series. Fawlty Towers consisted of only twelve episodes; Cleese and Booth both maintain that this was to avoid compromising the quality of the series.

During the 1980s and 1990s, Cleese focused on film. In the same year, Cleese played Petruchio, in Shakespeare's The Taming of the Shrew in the BBC Television Shakespeare series.

In 1981 he starred with Sean Connery and Michael Palin in the Terry Gilliam-directed Time Bandits as Robin Hood. He also participated in Monty Python Live at the Hollywood Bowl (1982) and starred in The Secret Policeman's Ball for Amnesty International. In 1985, Cleese had a small dramatic role as a sheriff in Silverado, which had an all-star cast that included Kevin Kline, with whom he would star in A Fish Called Wanda three years later. In 1986, he starred in Clockwise. 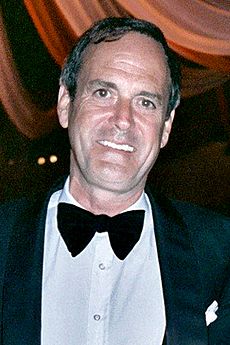 Cleese at the 1989 Academy Awards

Timed with the 1987 UK elections, he appeared in a video promoting proportional representation.

In 1988, he wrote and starred in A Fish Called Wanda as the lead, Archie Leach, along with Jamie Lee Curtis, Kevin Kline, and Michael Palin. Wanda was a commercial and critical success, and Cleese was nominated for an Academy Award for his script. Cynthia Cleese starred as Leach's daughter.

Cleese would later play a supporting role in Kenneth Branagh's adaptation of Mary Shelley's Frankenstein alongside Branagh himself and Robert De Niro.

With Robin Skynner, the group analyst and family therapist, Cleese wrote two books on relationships: Families and How to Survive Them, and Life and How to Survive It. The books are presented as a dialogue between Skynner and Cleese.

In 1996, Cleese declined the British honour of Commander of the Order of the British Empire (CBE). The follow-up to A Fish Called Wanda, Fierce Creatures— which again starred Cleese alongside Kevin Kline, Jamie Lee Curtis, and Michael Palin—was also released that year, but was greeted with mixed reception by critics and audiences.

In 1999, Cleese appeared in the James Bond film, The World Is Not Enough as Q's assistant, referred to by Bond as "R". In 2002, when Cleese reprised his role in Die Another Day, the character was promoted, making Cleese the new quartermaster (Q) of MI6.

In 2004, Cleese was featured as Q in the video game James Bond 007: Everything or Nothing, featuring his likeness and voice. Cleese did not appear in the subsequent Bond films, Casino Royale, Quantum of Solace and Skyfall; in the latter film, Ben Whishaw was cast in the role of Q.

Cleese is Provost's Visiting Professor at Cornell University, after having been Andrew D. White Professor-at-Large from 1999 to 2006. He makes occasional well-received appearances on the Cornell campus.

In 2001, Cleese was cast in the comedy Rat Race as the eccentric hotel owner Donald P. Sinclair, the name of the Torquay hotel owner on whom he had based the character of Basil Fawlty.

In 2007, Cleese appeared in ads for Titleist as a golf course designer named "Ian MacCallister", who represents "Golf Designers Against Distance". Also in 2007, he started filming the sequel to The Pink Panther, titled The Pink Panther 2, with Steve Martin and Aishwarya Rai.

At a comic press conference in November 2013, Cleese and other surviving members of the Monty Python comedy group announced a reuniting performance to be held in July 2014.

Cleese met Connie Booth in the US and they married in 1968. In 1971, Booth gave birth to Cynthia Cleese, their only child. With Booth, Cleese wrote the scripts for and co-starred in both series of Fawlty Towers, even though the two were actually divorced before the second series was finished and aired. Cleese and Booth are said to have remained close friends since. Cleese has two grandchildren, Evan and Olivia, through his eldest daughter's marriage to Ed Solomon.

Cleese married American actress Barbara Trentham in 1981. Their daughter Camilla, Cleese's second child, was born in 1984. He and Trentham divorced in 1990. During this time, Cleese moved to Los Angeles.

In 1992, he married American psychotherapist Alyce Faye Eichelberger. They divorced in 2008.

Less than a year later, he returned to the UK, where he has property in London and a home on the Royal Crescent in Bath, Somerset.

In August 2012, Cleese married English jewellery designer and former model Jennifer Wade in a ceremony on the Caribbean island of Mustique.

Cleese has a passion for lemurs. Following the 1997 comedy film Fierce Creatures, in which the ring-tailed lemur played a key role, he hosted the 1998 BBC documentary In the Wild: Operation Lemur with John Cleese, which tracked the progress of a reintroduction of black-and-white ruffed lemurs back into the Betampona Reserve in Madagascar. The project had been partly funded by Cleese's donation of the proceeds from the London premier of Fierce Creatures. Cleese is quoted as saying, "I adore lemurs. They're extremely gentle, well-mannered, pretty and yet great fun ... I should have married one."

The Bemaraha woolly lemur (Avahi cleesei), also known as Cleese's woolly lemur, is native to western Madagascar. The scientist who discovered the species named it after Cleese, mainly because of Cleese's fondness for lemurs and his efforts at protecting and preserving them. The species was first discovered in 1990 by a team of scientists from Zurich University led by Urs Thalmann, but was not formally described as a species until 11 November 2005.

All content from Kiddle encyclopedia articles (including the article images and facts) can be freely used under Attribution-ShareAlike license, unless stated otherwise. Cite this article:
John Cleese Facts for Kids. Kiddle Encyclopedia.