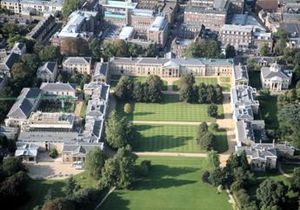 Downing College from above

Downing College is one of the colleges of the University of Cambridge, England. It was built in 1800 and has around 650 students.

The name comes from Sir George Downing, who left money and land in his will to build a college when he died in 1749. However, not everyone in the family agreed with this. So, for many years until 1800 there were fights in courts until the judges decided that the will should be followed.

All content from Kiddle encyclopedia articles (including the article images and facts) can be freely used under Attribution-ShareAlike license, unless stated otherwise. Cite this article:
Downing College, Cambridge Facts for Kids. Kiddle Encyclopedia.