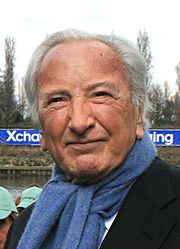 Michael Robert Winner (30 October 1935 – 21 January 2013) was an English movie director, producer, writer, editor, actor and restaurant critic. He was known for his work on the Death Wish movie series.

Winner was born on 30 October 1935 in Hampstead, London, England. His parents were Jewish immigrants: his mother was Polish and his father was of Russian descent. He studied at St Christopher School, Letchworth, and Downing College, Cambridge. He was married to Geraldine Lynton-Edwards from 2011 until his death in 2013. Winner retired in December 2012 and died on 21 January 2013 in Kensington, London, England from an liver illness, aged 77.

All content from Kiddle encyclopedia articles (including the article images and facts) can be freely used under Attribution-ShareAlike license, unless stated otherwise. Cite this article:
Michael Winner Facts for Kids. Kiddle Encyclopedia.