Kensington is an affluent district in the Royal Borough of Kensington and Chelsea in the West of Central London.

The district's commercial heart is Kensington High Street, running on an east–west axis. The north-east is taken up by Kensington Gardens, containing the Albert Memorial, the Serpentine Gallery and Speke's monument. South Kensington and Gloucester Road are home to Imperial College London, the Royal College of Music, the Royal Albert Hall, Natural History Museum, Victoria and Albert Museum, and Science Museum. The area is also home to many international embassies and consulates and the residence of many politicians and billionaires.

The first mention of the area is in the Domesday Book of 1086, where it was written in Latin as "Chenesitone", which has been interpreted to have originally been "Kenesignetun" (Kenesigne's land or meadows) in Anglo-Saxon. A variation may be Kesyngton, in 1396. 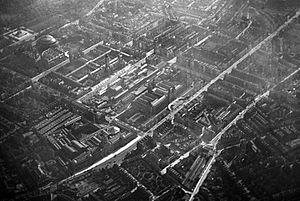 A picture of Kensington taken by scientist Sir Norman Lockyer in 1909 from a helium balloon. (This is a mirrored image of Kensington)

The manor of Kensington, Middlesex, was granted by William I to Geoffrey de Montbray or Mowbray, bishop of Coutances, one of his inner circle of advisors and one of the wealthiest men in post-Conquest England. He in turn granted the tenancy of Kensington to his vassal Aubrey de Vere I, who was holding the manor in 1086, according to Domesday Book. The bishop's heir, Robert de Mowbray, rebelled against William Rufus and his vast barony was declared forfeit. Aubrey de Vere I had his tenure converted to a tenancy in-chief, holding Kensington after 1095 directly of the crown. He granted land and church there to Abingdon Abbey at the deathbed request of his young eldest son, Geoffrey. As the Veres became the earls of Oxford, their estate at Kensington came to be known as Earls Court, while the Abingdon lands were called Abbots Kensington and the church St Mary Abbots.

The original Kensington Barracks, built at Kensington Gate in the late 18th century, were demolished in 1858 and new barracks were built in Kensington Church Street. 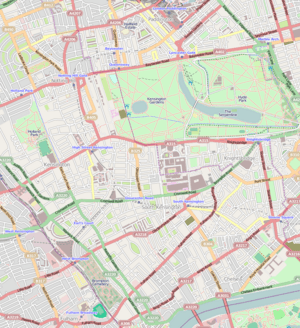 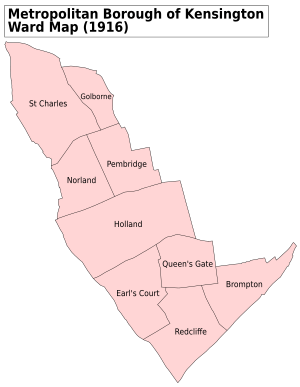 A map showing the wards of Kensington Metropolitan Borough as they appeared in 1916.

The focus of the area is Kensington High Street, a busy commercial centre with many shops, typically upmarket. The street was declared London's second best shopping street in February 2005 thanks to its range and number of shops. However, since October 2008 the street has faced competition from the Westfield shopping centre in nearby White City.

Kensington's second group of non-residential buildings is at South Kensington, where several streets of small to medium-sized shops and service businesses are close to South Kensington tube station. This is also the southern end of Exhibition Road, the thoroughfare that serves the area's museums and educational institutions.

The edges of Kensington are not well-defined; in particular, the southern part of Kensington has conflicting and complex borders with Chelsea whether electoral or postal definitions are used, and has similar architecture. To the west, a border is kept along the line of the Counter Creek marked by the West London railway line and Earl's Court Road further south into other London districts. To the north, the only obvious dividing line is Holland Park Avenue, to the north of which is the district of Notting Hill which is part of the traditional definitions of Kensington and a subset of North Kensington.

In the north east, the large Royal Park of Kensington Gardens (contiguous with its eastern neighbour, Hyde Park) is a green buffer. The other main green area in Kensington is Holland Park, just north of Kensington High Street, a minority of roads have small residential garden squares.

South Kensington is of the same, largely private housing, use as central Kensington; the more economically and socially nationally reflective North Kensington and West Kensington are diverse and lack the tourism of the rest of Kensington.

Kensington is, in general, an extremely affluent area, a trait that it now shares with its neighbour to the south, Chelsea. The area has some of London's most expensive streets and garden squares, including Edwardes Square, most of the Holland Park neighbourhood and Wycombe Square, private redevelopments in Regency architecture. In early 2007, houses sold in Upper Phillimore Gardens for in excess of £20 million. Adjoining neighbourhoods have residential areas and have accordingly been subdivided or have overlapping district names all, unlike Kensington, without an ancient parish predecessor: Knightsbridge, Brompton, Belgravia, Holland Park and Notting Hill.

Kensington is also very densely populated; it forms part of the most densely populated local government district (the Royal Borough of Kensington and Chelsea) in the United Kingdom. This high density is not formed from high-rise buildings; instead, it has come about through the subdivision of large mid-rise Georgian and Victorian terraced houses (generally of some four to six floors) into flats. Unlike northern extremities of the Borough, Kensington lacks high-rise buildings except for the Holiday Inn's London Kensington Forum Hotel in Cromwell Road, which is a 27-storey building.

Kensington is crossed east-west by three main roads, the most important of which is the A4 or Cromwell Road which connects it to both Central London and Heathrow Airport. To the north is the mostly parallel Kensington Road (of which Kensington High Street forms a large part), linking central London and Hammersmith to the area. To the south is Fulham Road, which connects South Kensington with Fulham to the southwest. North-south connections are not as well-developed and there is no obvious single north-south route through the area.

Kensington is well served by public transport. Most of Kensington is served by three stations in the Travelcard Zone 1: High Street Kensington, Gloucester Road and South Kensington. All three are served by the Circle line which connects them to London's railway terminals. The District line also serves all three stations, albeit on different branches; it links the latter two to Westminster and the City. The Piccadilly line also links South Kensington and Gloucester Road to the West End in about 10 minutes, and in the other direction to Heathrow Airport in about 40 minutes. In addition Kensington (Olympia) in Travelcard Zone 2 serves the western part of Kensington, with District line trains to Earl's Court and High Street Kensington. Nearby West Kensington station takes its name from the former boundaries with Hammersmith and is not in the Borough.

A number of local bus services link Kensington into the surrounding districts, and key hubs are Kensington High Street and South Kensington station. These bus services were improved in frequency and spread from 2007 until 2010 when the western extension of the London congestion charge area existed (which required drivers of cars and vans during the charging hours Monday-Friday to pay a daily fee of £8).

See also: List of districts in Hammersmith and Fulham

All content from Kiddle encyclopedia articles (including the article images and facts) can be freely used under Attribution-ShareAlike license, unless stated otherwise. Cite this article:
Kensington Facts for Kids. Kiddle Encyclopedia.