Thomas Stanley Holland (born 1 June 1996) is an English actor. A graduate of the BRIT School in London, he began his acting career on stage in the title role of Billy Elliot the Musical in the West End theatre from 2008 to 2010. He gained further recognition for his starring role in the disaster film The Impossible (2012), receiving the London Film Critics Circle Award for Young British Performer of the Year.

Thomas Stanley Holland was born on 1 June 1996 in the London borough of Kingston upon Thames, to Nicola Elizabeth (née Frost), a photographer, and Dominic Holland, a comedian and author. His paternal grandparents were born on the Isle of Man and Tipperary, Ireland, respectively. He has three younger brothers: twins Harry and Sam (born 14 February 1999) and Patrick "Paddy" (born 6 December 2004).

Holland was educated at Donhead, a Roman Catholic preparatory school in Wimbledon in South West London, followed by Wimbledon College, a voluntary aided Jesuit Roman Catholic comprehensive school (also in Wimbledon), up until December 2012. He was bullied in school for being a dancer. After Wimbledon College, he attended the BRIT School for Performing Arts and Technology in Croydon. In his late teens, during a lull in his career, Holland briefly attended carpentry school in Cardiff, Wales. 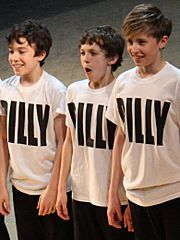 Holland (centre) performing at the fifth anniversary of Billy Elliot the Musical at the Victoria Palace Theatre, London on 31 March 2010

Holland began dancing at a hip hop class at Nifty Feet Dance School in Wimbledon. He danced with his school group at the 2006 Richmond Dance Festival, where he was spotted by choreographer Lynne Page, an associate to Peter Darling, choreographer of Billy Elliot and Billy Elliot the Musical.

After eight auditions and two subsequent years of training, on 28 June 2008, Holland made his West End debut in Billy Elliot the Musical as Michael, Billy's best friend. He gave his first performance in the title role on 8 September 2008, receiving positive notices. Holland first learned gymnastics during his time performing in the musical.

In September 2008, Holland (together with co-star Tanner Pflueger) gave his first TV interview, on the news programme on channel FIVE. The following 31 January, he was on the premiere of the ITV1 show The Feel Good Factor, during which he performed a version of "Angry Dance" from Billy Elliot the Musical, along with Pflueger and Layton Williams, two other actors who were playing the title role, and was interviewed by host Myleene Klass. For the final The Feel Good Factor on 28 March 2009, he trained five British schoolboys for a dance routine.

In 2011, Holland was cast in the British dub of the animated fantasy film Arrietty, produced by Japan's Studio Ghibli. He provided a voice for the principal character Sho. Holland made his feature film debut in The Impossible (2012), directed by J.A. Bayona, alongside Naomi Watts and Ewan McGregor. The film premiered at the Toronto International Film Festival on 9 September 2012 and was a critical and commercial success, earning $180.3 million worldwide. Holland received universal praise from critics and won several awards, including the National Board of Review Award for Breakthrough Performance and London Film Critics Circle Award for Young British Performer of the Year.

He starred as Isaac in the drama film How I Live Now, which was released in the UK on 4 October 2013, co-starring Saoirse Ronan. Holland also appeared alongside Tom Hardy in a supporting role for the drama film Locke (2013), and made a brief appearance in Billy Elliot the Musical Live (2014) to celebrate his role as a 'former Billy'. 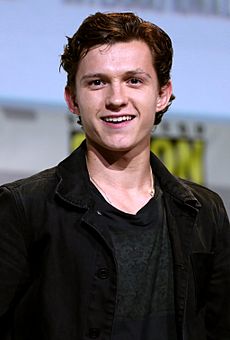 In 2015, Holland appeared in four episodes of BBC Two's historical miniseries Wolf Hall, as Gregory Cromwell, son of the protagonist Thomas Cromwell played by Mark Rylance. He also co-starred as Thomas Nickerson in the film In the Heart of the Sea (2015), directed by Ron Howard.

On 23 June 2015, it was announced that Holland was cast as a teenage Peter Parker / Spider-Man, and his "life was flipped upside down", as he later tweeted, as part of a six-picture deal with Marvel Studios. As part of the Marvel Cinematic Universe (MCU), he first appeared as Spider-Man in Captain America: Civil War (2016). The film was a massive critical and commercial success, grossing over $1.1 billion worldwide, making it the highest-grossing film of 2016, with Holland receiving critical praise.

In 2016, he played Bradley Baker in the film Edge of Winter, where he co-starred with Joel Kinnaman and Percy Hynes White. In 2017, Holland co-starred alongside Charlie Hunnam in the drama film The Lost City of Z, directed by James Gray, and released in April, to positive critical reception. Holland also performed as the on-set stand-in for the character of The Monster as he would reunite with director J.A. Bayona in the film A Monster Calls (2016). Actor Liam Neeson provided the voice for the character, while Holland was credited with a special thanks.

In 2017, the 20-year-old Holland won the BAFTA Rising Star Award at the 70th British Academy Film Awards, becoming the second-youngest winner of the award, after British actress Bukky Bakray, who won the award at age 19.

He later co-starred alongside Richard Armitage and Jon Bernthal in the film Pilgrimage. The film premiered on 23 April 2017 at the Tribeca Film Festival, in its "Viewpoint" sections. Also that year, Holland played Samuel Insull alongside Avengers co-star Benedict Cumberbatch in Alfonso Gomez-Rejon's The Current War, which premiered at the Toronto International Film Festival. Early reviews of The Current War were mixed, but Holland's performance received praised. In May 2017, Holland appeared with Zendaya on Paramount Network's Lip Sync Battle, during which he performed a dance number to Rihanna's "Umbrella".

Holland at the Spider-Man: Homecoming premiere in June 2017

July 2017 brought the release of Spider-Man: Homecoming, in which Holland reprised his role from Captain America: Civil War. Homecoming received positive reviews and Holland considerable praise, with his performance being called "a star performance given by a born actor." The film went on the gross over $800 million worldwide. This performance earned Holland a Guinness Book of World Records listing as the youngest actor to play a title role in the MCU.

Holland reprised Spider-Man in Avengers: Infinity War, which was released on 27 April 2018, and then in that film's follow-up, Avengers: Endgame, released on 26 April 2019. Holland began shooting the sequel Spider-Man: Far From Home in July 2018, with production wrapping that October. The film was released worldwide on 2 July 2019. The trailer was first shown at Sony's CCXP Brazil panel on 8 December 2018, with Holland and Jake Gyllenhaal, who portrays Mysterio, in attendance to promote the film.

Holland next co-starred with Will Smith in the Blue Sky Studios animated film Spies in Disguise, voicing the film's leads, which was released in December 2019. In 2020, Holland voiced Jip, a dog, in the live action film Dolittle, alongside his MCU co-star Robert Downey Jr.. He then had the lead voice role of Ian Lightfoot, an elf, opposite Avengers co-star Chris Pratt, in the Pixar animated film Onward. Holland next starred in The Devil All the Time, a psychological thriller film set post-World War II, alongside his Avengers co-star Sebastian Stan. The film, released in September 2020, was directed by Antonio Campos and produced by Gyllennhaal.

Holland headlined Chaos Walking, an adaptation of Patrick Ness' best-selling science fiction series of the same name alongside Daisy Ridley. He plays as Todd Hewitt. The film was directed by Doug Liman and is distributed by Lionsgate. Following poor test screenings, he returned for the film's reshoots and was released on 5 March 2021. In March 2019, it was confirmed that Holland was cast as the lead role in Cherry, based on the novel of the same name, reteaming him with his Avengers directors, the Russo brothers. The movie was released in theaters on 26 February 2021, and was released digitally on Apple TV+ on 12 March 2021.

In October 2020, Holland worked on Spider-Man: No Way Home, which wrapped filming at the end of March 2021. Additionally, in May 2017, it was announced that he had been cast as a young Nathan Drake in the 2022 film adaptation of Naughty Dog's Uncharted video game series. Principal photography began on 16 March 2020, shooting in Berlin, which wrapped in October 2020. He is also now cast as the lead role in the adaptation of Beneath the Scarlet Sky with Amy Pascal production company producing.

In 2016, Holland was cast in The Modern Ocean, an experimental epic from writer-director Shane Carruth. Holland called it "the best script I’ve ever read". The project has encountered development problems, with Holland set for a supporting role alongside an ensemble cast with Keanu Reeves, Daniel Radcliffe, Anne Hathaway, Jeff Goldblum and Chloë Grace Moretz. Following Carruth's announcement of retirement and he himself releasing the full script and the unfinished score, the project is unlikely to begin production anytime soon. He was also pushing for a lead role in Sam Mendes' 1917 in September 2018, but ultimately was not involved as he was contractually obligated to do reshoots for Chaos Walking in April 2019.

In 2020, Holland claimed in an interview with BBC Radio 1 that he was approached by an unnamed producer over a possible reboot of the Back to the Future franchise with him starring the lead role as Marty McFly (or a similar new character). However, Holland stated he was reluctant to take up this offer as he described the existing films as 'perfect films', though he would be interested in re-creating scenes from the films in a deep fake homage video or short film.

Holland has said that his long-term career plans include "do[ing] some more franchises," and playing "some meatier indie roles and eventually...transition to the other side of the camera and branch into directing."

Holland resides in Kingston upon Thames in London, near the house of his parents and younger brothers. He has a blue Staffordshire Bull Terrier named Tessa. He was diagnosed with dyslexia at age seven.

Holland is close friends with Harrison Osterfield, whom he met at the BRIT School. He brought Osterfield on as his personal assistant for four films.

Along with his three younger brothers, Holland sponsors The Brothers Trust, a UK Registered Charity that raises money for various charitable causes.

All content from Kiddle encyclopedia articles (including the article images and facts) can be freely used under Attribution-ShareAlike license, unless stated otherwise. Cite this article:
Tom Holland Facts for Kids. Kiddle Encyclopedia.