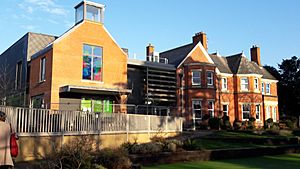 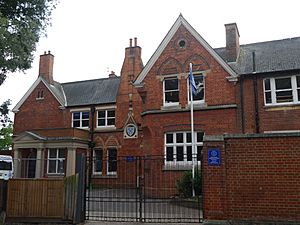 Donhead is an independent, preparatory, day school for boys located in Wimbledon in the London Borough of Merton. It previously served as the main feeder prep school of Wimbledon College, a fellow Jesuit school located across the road. Both schools are under the governance of the Jesuits.

Donhead takes boys aged 4 to 11, after which they often continue their secondary education at Wimbledon College or at various independent or grammar schools across London.

The name Donhead perhaps originates from the Anglo-Saxon "head" meaning top and "don" meaning hill – "the top of the hill". The building known as Donhead Lodge was built in 1867 and was first occupied by a barrister, one Freeman Oliver Haynes. Mr Haynes died in 1880 and soon after a Miss Elizabeth Arnold became the owner. In 1902 the house was taken over by Henry Smail and remained in the family's ownership until after the death of Mrs. Smail in 1932. By the early 1930s, Wimbledon College was looking for suitable premises in Wimbledon where the junior classes could migrate to form a preparatory school with its own headmaster. Fr Oscar Xavier Withnell SJ, Wimbledon College's rector at the time, was given first refusal to purchase the house immediately opposite the College gates at a purchase price of £6000. This house was "Donhead Lodge". Donhead's first pupils consisted of three classes named Elements, Preparatory, and Lower Preparatory, and numbered approximately 67 boys in total. They entered the school for the first time at 9:50 Monday morning 5 September 1933 under the guidance of Donhead's first headmaster, Fr Miller.

Although the three classes had migrated across the road, the journey to and from the College was repeated many times as Donhead relied on the College continuing to allow it to use certain facilities - chapel, gymnasium, playing fields, etc. A special cap, tie, and blazer did not come into use until the second and third terms. Mr Wiber, with Fr. Rector's final approval, negotiated with the firm Dempsey's of Tulse Hill to supply a "Royal Blue" uniform, to get away from what was described as "the rather drab, College dark-blue". The "Royal Blue" colour was a distinctly lighter shade than what one might be familiar with today – one reason being that the original colour became impossible to get during the war.

For many years the College authorities regarded Donhead mainly as a Junior Department and exercised fairly tight control on all aspects of the school. From the beginning the boys in each class were organised into two sides to compete against each other in the marks given for academic work (Romans and Carthaginians). The reward for the winners at the end of term was the "Victory Walk", originally an afternoon free of classes and taken up with a pleasant walk on Wimbledon Common. In the course of time alternative attractions replaced the walk but the title remained.

Sport was an activity which relied on the use of the College fields on Edge Hill or at the recently acquired grounds on Coombe Lane. The recognised sports were Rugby and Cricket and the first school rugby match was against Kings College School (away) in November 1935, the Under 11 team losing by 0-18. Athletics was given a short season in the spring and early summer and Donhead were given some events on the College Sports Day. Other sports that took place were cross-country, boxing, swimming and croquet (on the Donhead lawn). The "House" system did not start till 1936 and initially there were two houses, Loyola and Xavier, with the first House Tea being held in July 1937, when Xavier beat Loyola by 715-677. For a short period of time, the Lower Preps had their own teams, Aloysius and Stanislaus.

In 2011, the school's Rugby Union Under 11A team were the National champions. They beat Blundell's in the final with tries from Chris Morris and Joshua Tiernan.

All content from Kiddle encyclopedia articles (including the article images and facts) can be freely used under Attribution-ShareAlike license, unless stated otherwise. Cite this article:
Donhead Preparatory School Facts for Kids. Kiddle Encyclopedia.