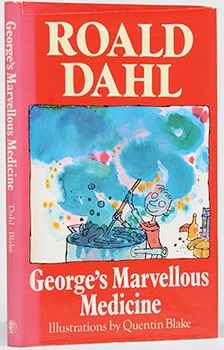 An example of Blake's work, illustrating the cover of Roald Dahl's book George's Marvellous Medicine. Blake is well known for his work with Dahl.

Quentin Saxby Blake CBE (born December 16 1932 in Sidcup) is a British cartoonist, illustrator and children's book author, most known for his drawings in books written by Roald Dahl.

Blake went to Chislehurst and Sidcup Grammar School. His first published drawing was for Punch magazine, at the age of 16. He studied English Literature at Downing College, Cambridge (1953-6) and later studied at the Chelsea School of Art. He trained as a teacher at the Institute of Education before working at the Royal College of Art.

Blake gained a reputation as an illustrator of over 300 children's books. His work in Roald Dahl's books made him internationally famous. As well as his work with Dahl, Blake has also written several books of his own.

This is a list only of books both written and illustrated by Blake.

All content from Kiddle encyclopedia articles (including the article images and facts) can be freely used under Attribution-ShareAlike license, unless stated otherwise. Cite this article:
Quentin Blake Facts for Kids. Kiddle Encyclopedia.